There is a leak at the oil filter adapter and power steering pump. There were codes for LT fuel trims being rich and evap leak. The TB coupler and clamps were trashed. Paint is trash and the interior is weather beaten. Also, has 95 Cobra R Reps on it. The car has the 04 emblems on it; no clue why.


I found myself going overboard on my GT convertible which was initially supposed to be built to make 400hp and be fun to take the wife and daughter out to eat, local trips, cruises, and such.

This Mach 1 will allow me to ease up a bit on the GT and make it more appealing for my wife and daughter to ride in while I focus on the Mach 1 being built to race.

First steps is to get the leaks diagnosed and a compression test done just as a precaution.

Hope you all enjoy this.

Your wife will love you for taking this route in the long run. Nice to have a dedicated racer and then a more casual GT for nice street cruising with your wife and daughter.

CobraBob said:
Your wife will love you for taking this route in the long run. Nice to have a dedicated racer and then a more casual GT for nice street cruising with your wife and daughter.

My wife seems very receptive. It could be be my daughter is super excited about “daddy’s race car”. My little girl makes me laugh.

Update on the Mach 1 and a walk around.

The car has leaks at the power steering pump, lines, and oil pan. I have a bunch of parts for the build. Time to see what happens or blow shit up. Either way it will be a ton of fun.

You're prepared either way, so that's good. I'll be following this thread.

CobraBob said:
You're prepared either way, so that's good. I'll be following this thread.
Click to expand...

There is a part of me that wants to go full retard with this car and return it to as close to stock as possible and start fresh for more content. I am trying to do a road map of parts and mods for guys that want to buy cars and take to the strip.

That a noble goal!

Not a big update, in order to clear some garage space, I swapped wheels. The car came with 95 Cobra R Reps and I swapped with SVE Drifts. Fronts are wrapped in Toyo T1 Sports and the rears are R888s. 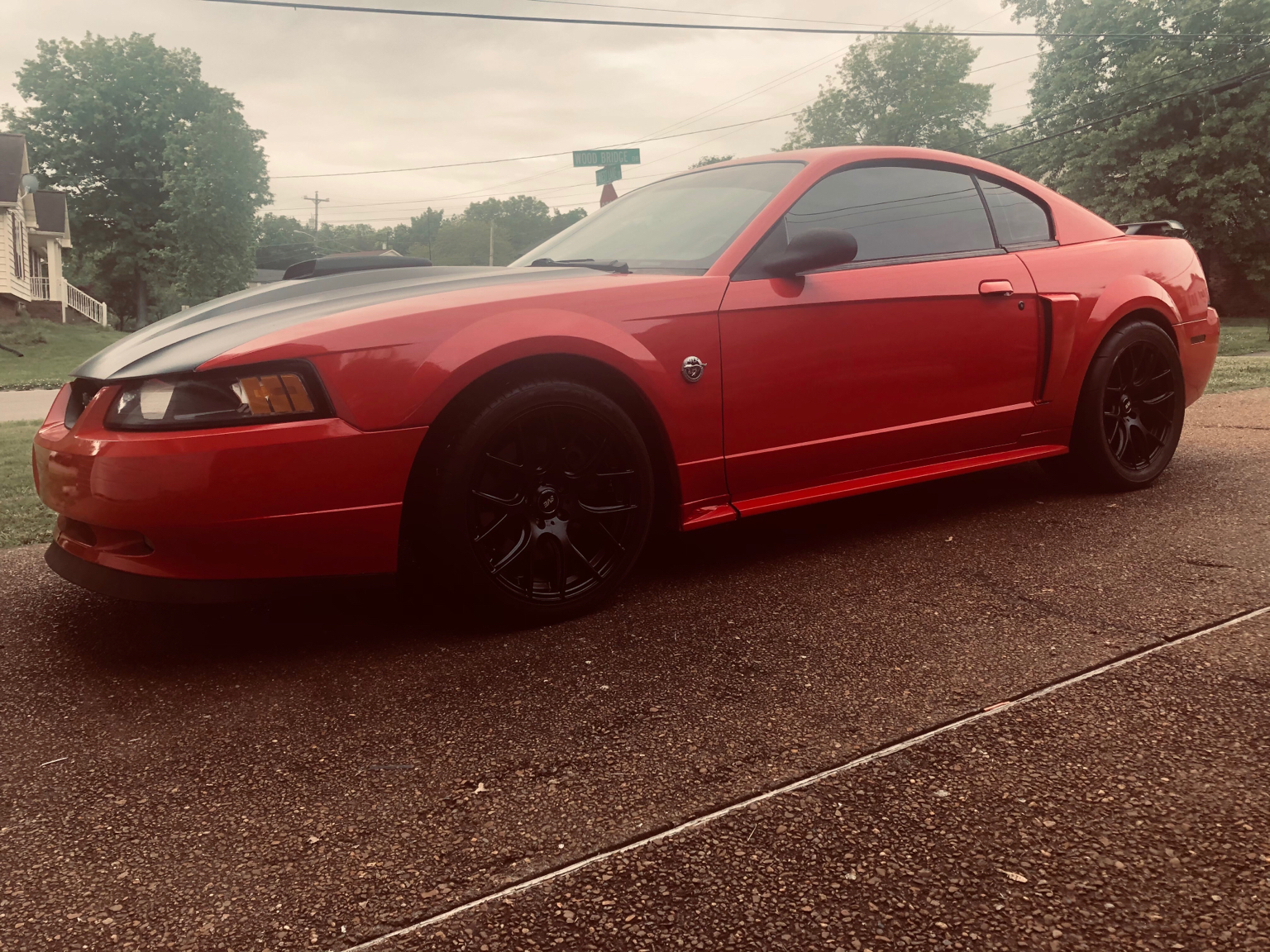 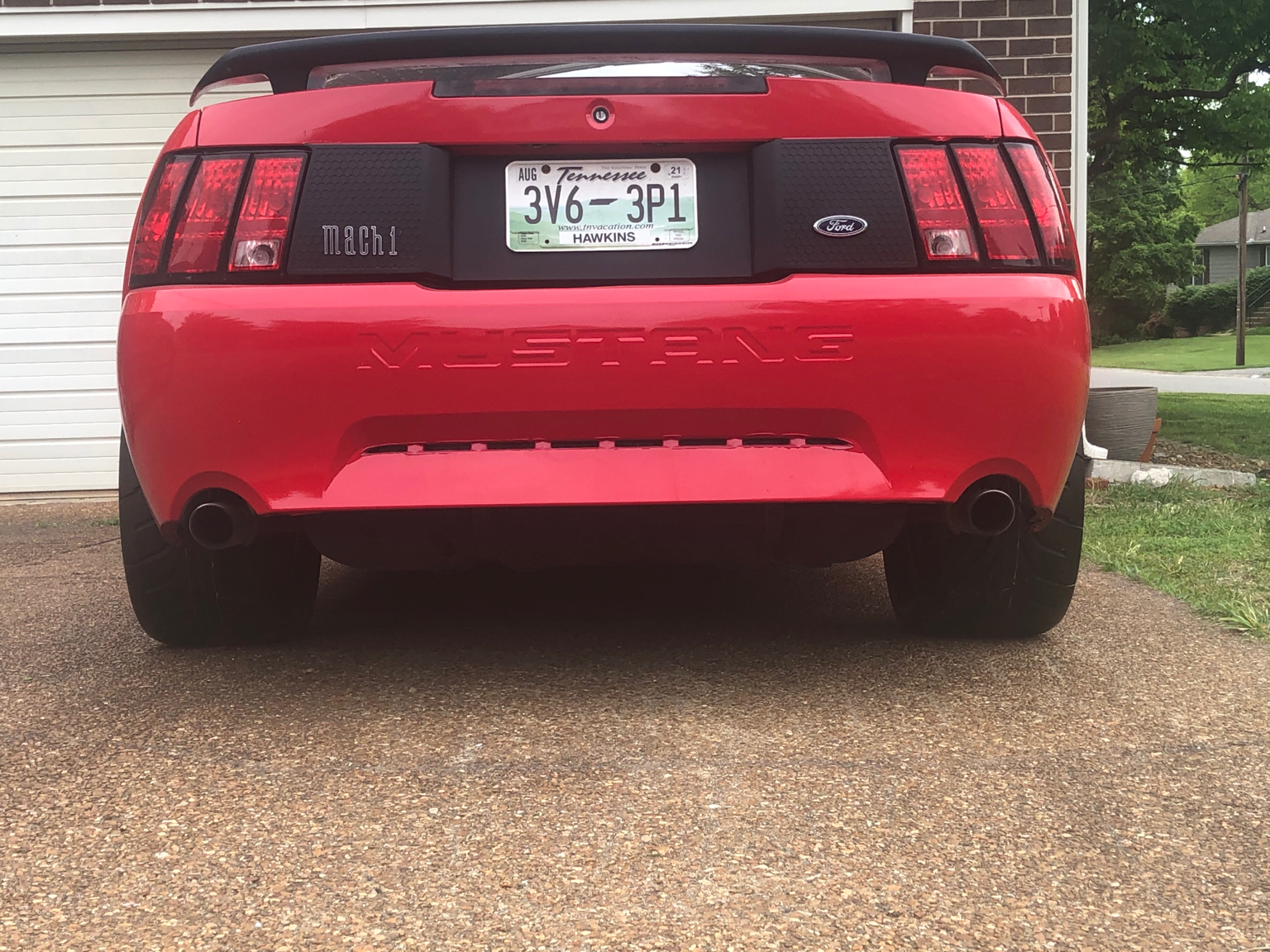 I should have some more updates soon. We will see what the engine looks like.


Nurses Aide Korninmyrectum to the ICU for Code Brown cleanup.

So an update on the Mach 1.

The “built rear” probably only consists of upgraded gears as the axles are stock. Some idiot removed the slip joint at the catback and welded it, the Viking rears need replaced as the settings changes are suspect at best (rebound on passenger side won’t budge and the is no stop to the negative side on the compression), I found cut wires, and I broke the plastic piece near the lug on the fuse box in the engine bay and it still didn’t loosen.

I think I may have a fuel system issue. It is supposed to have an Aeromotive Stealth Fuel System but data logging shows fuel pressure drop to low 30s sometimes when getting on it and it bogs like the cut you feel with traction control on and it seeing slip.

Last, the driver’s side license plate bulb will not illuminate. I replaced the bulb and still nothing. Gotta do some wire tracing. The passenger side window switch does not work.

I did some upgrades and started working on fixing some wiring. I really need to get my garage cleaned to where both the Mach 1 and GT can be parked inside. I hesitate to do too much at this time due to not wanting the car torn apart over night.

You will. This is a good project, and we'll get to take the ride with you even as you tackle and resolve issues. It's all good!

Those cars are getting tougher to find.

SID297 said:
Those cars are getting tougher to find.
Click to expand...

The prices are skyrocketing for them when you do find them. I have seen salvage cars with over 100k miles going for over $10k.

Hopefully the sounds are nothing to worry about. I am hoping to get another video up soon.

You're going to re-build the motor anyway, right?

CobraBob said:
You're going to re-build the motor anyway, right?
Click to expand...

Yes, however I was hoping this engine would be healthy. I am about to throw a blower on it.

So, I noticed that knock/slap a few times on start up before the oil change. It was on 20W-50 for break in. I switched to 5W-30 and that noise while audible I. The video is not audible in the car. The sound never increases with RPM just a second or two at start up then gone. I am clueless as to what it could be. It has a Melling Timing Kit. Somebody said maybe tensioner.

I am also having a bogging issue at times when you first get on it, almost like fuel cut. It doesn’t happen all the time but when it does fuel pressure drops to low 30s then quickly comes back up through the pull to upper 40s low 50s. I don’t know if it is a FRPS, pumps, or something else.

I found the built rear isn’t so built. At least the axles are stock I don’t know about anything else.

The Viking shocks in the rear are dead I think.

Now I have a more complete picture in my head of what you're doing. It's nice that you have a much of parts on hand should you need them. Also great that you're going see what state the current engine is in as an early step. It's going to be fun following your build.

CobraBob said:
Now I have a more complete picture in my head of what you're doing. It's nice that you have a much of parts on hand should you need them. Also great that you're going see what state the current engine is in as an early step. It's going to be fun following your build.
Click to expand...

I really wanted to go slow and document changes and what they do for the car. I am still thinking I want to take the car back to as close to stock as possible. Yes, I’d waste tons of money.

Or I jump in head first and see what ripples I make.