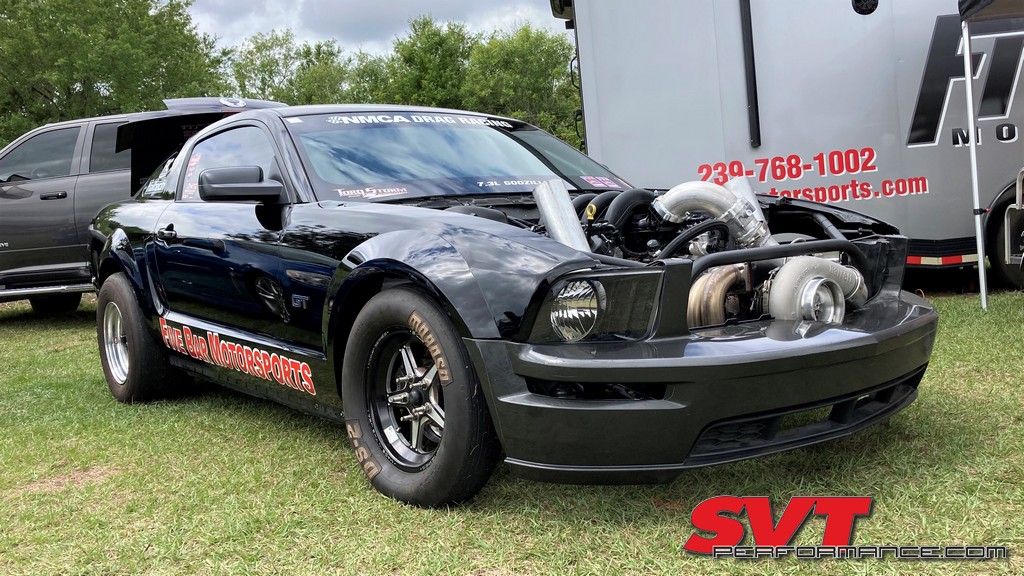 We all knew it was just a matter of time. The 7.3L Godzilla is the forbidden fruit of modern cubic inches that many in the Ford community have been lusting for since the last 385 Series rolled off the lines in the late 90’s. Sure; there was the Modular V10, but the exterior dimensions and weight of that engine precluded it ever being anything beyond a novelty in a vehicle that wasn’t truck based. Conversely, the 7.3L V8 is compact and relatively lightweight. Side-by-side, a Coyote based V8 appears physically massive next to a ‘Zilla. That means Godzilla may develop into a very popular swap consideration. 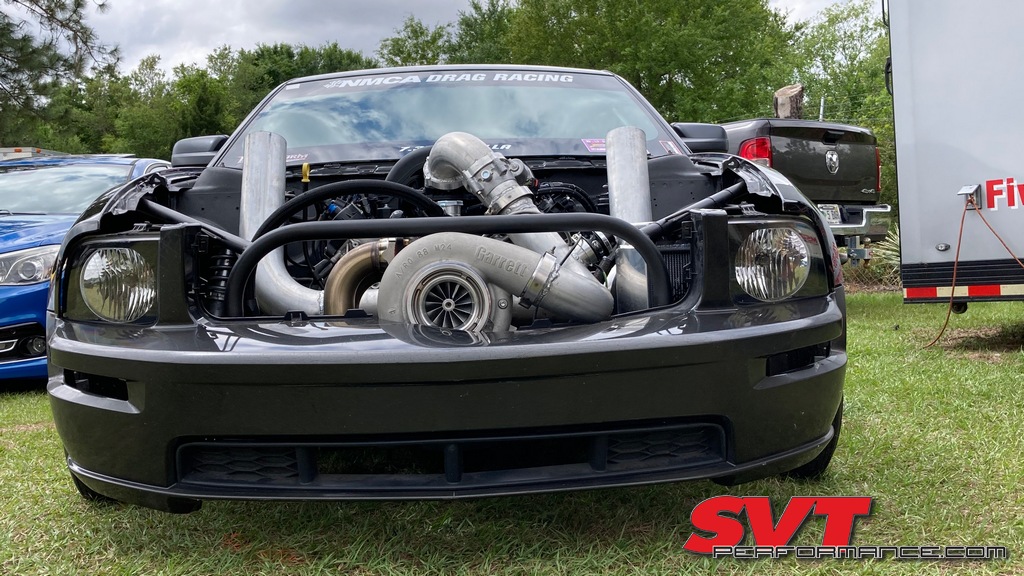 That's a frontend that just screams "All Business!!!"​

Still, for every new venture you’re going to need a few trail-blazers to clear the hurdles and illuminate the challenges for everyone else. That’s exactly what Five Bar Motorsports is doing with their Godzilla swapped S-197 drag car. They took their former 3V race car and stuffed in over 60% more displacement and a massive turbo. What’s not to love? 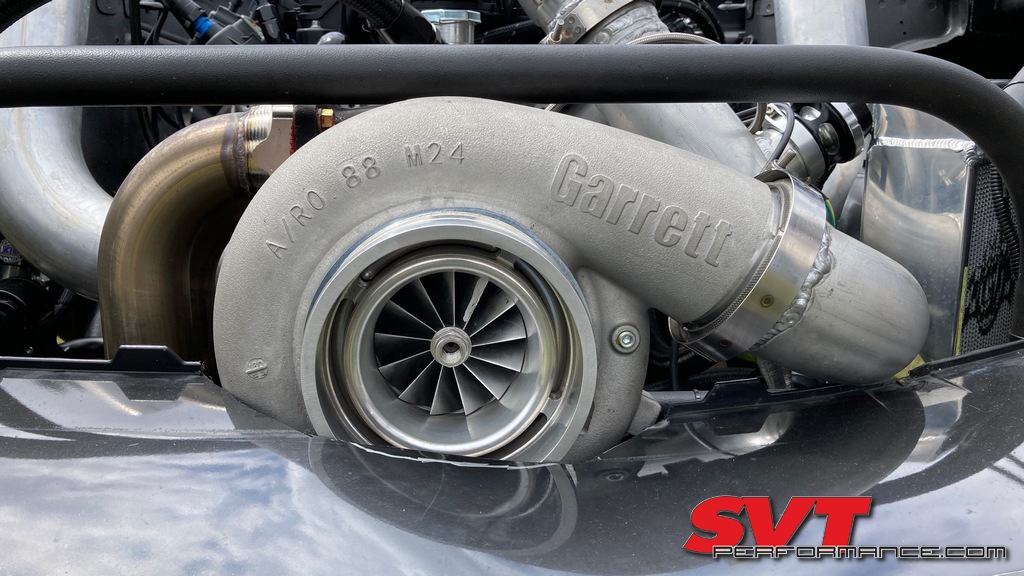 There's something about an oversized turbo mounted to a Big Ford V8 that just makes me happy.​

The Five Bar Setup is fairly simple, yet very effective. The long block is 100% stock, except for a VCT lockout kit and a re-gaped set of factory rings (which is much more boost friendly than the factory ring-gap spec). What is absolutely not-stock is the massive 88mm Garrett Turbocharger hanging out the front of the car. A set of custom fuel rails from Paul’s High Performance aid in feeding the beast a steady diet of E85. All that is backed up by a Turbo 400 trans feeding power to a Ford 9-Inch rear end. The engine is controlled by a Haltech Elite 2500 stand-alone ECU. When spun up to ~15-16 pounds of boost the combo made over 800 RWHP and well into 900 RWTQ range during a partial dyno pull. 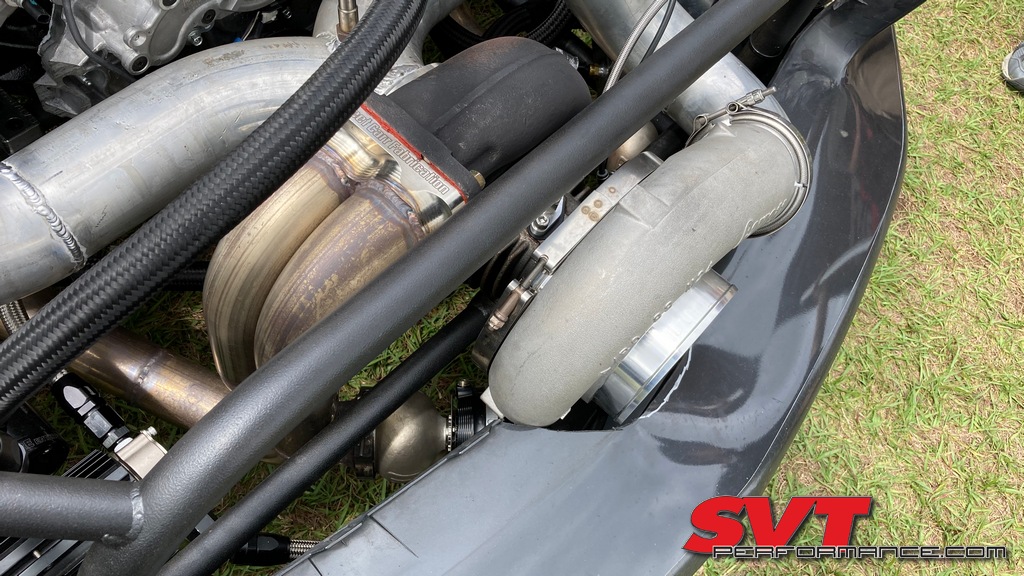 Lots of custom pipe bending and welding when into this build.​

To be sure, they are still working on overcoming several obstacles inherent in the 7.3L architecture due to its truck based roots. The biggest hurdle the Five Bar fabricators have come across is the 7.3L’s oil pan and oil pump design. Ford engineers designed a unique chain driven (from a sprocket [possibly supplied by Spacely’s] on the crank) variable displacement oil pump for the Godzilla. Since the engine was designed to live in ¾ ton and larger trucks the oil pan is also very deep. This is creating massive ground clearance issues for the Five Bar S-197. They actually have to leave the line at about 5PSI of boost to prevent the car from pulling the front wheels off the ground and coming back down on the oil pan. No one wants to see the track oiled down on a race weekend. A new oil pan can easily be fabricated, but installing an external oil pumps can start getting expensive. Still, there are known solutions to this problem than can be solved back at the shop with a little more time and investment. Such is the nature of a build like this. 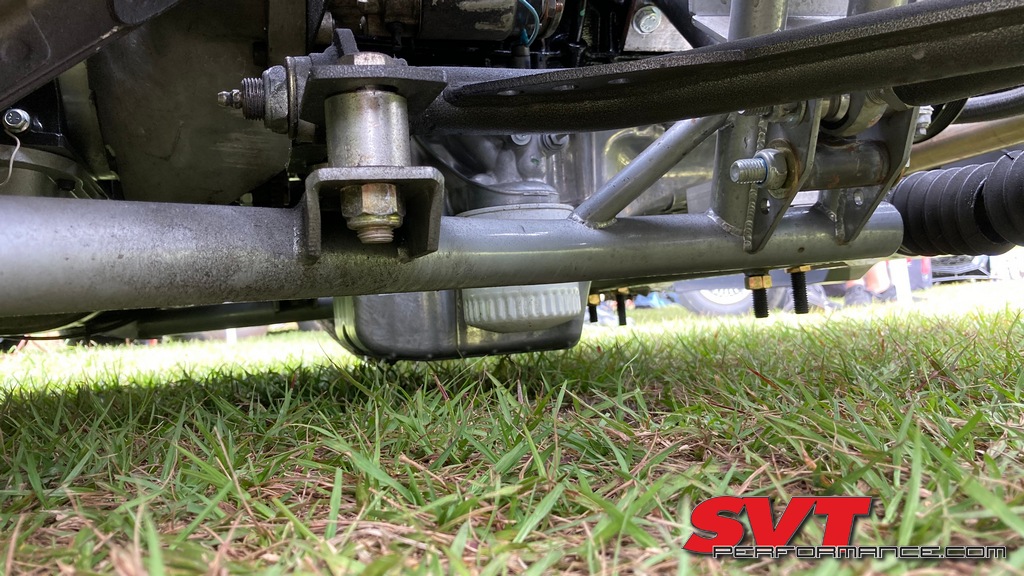 This is lack of ground clearance is the biggest issue holding back the Five Bar Motorsports Mustang from running well into the 8's on a stock motor.​

Joe at Five Bar also noted that the factory cam drops power out at 5,800 RPM, but we’re told that aftermarket camshaft options will be available in the very near future. One last peccadillo of the 7.3’s truck origins is the throttle body position. The factory manifold angles it upward, which is fine in a truck with massive amounts of hood clearance. When swapped into a car you’ll have to make some room for your intake piping unless you’re willing to compromise efficiency with some fairly severe angles. Again, expect to see aftermarket intake manifold options in the not-too-distant future.


​
As we mentioned above, the ring gap has been opened up from the factory spec. The Five Bar team learned the necessity of that the hard way. When upping the boost from 12 to 15 PSI the factory ring gap closed up, pinching the ring, and resulted in a broken piston. Tight ring gap tolerances are very common on modern engines. Less blow-by helps reduce emissions while getting the most work from the fuel charge burned on each power stroke. It also helps improve oil life. However; on heavily boosted applications you need a bit more room for things to expand, so a little filing work is required to open up the tolerances. 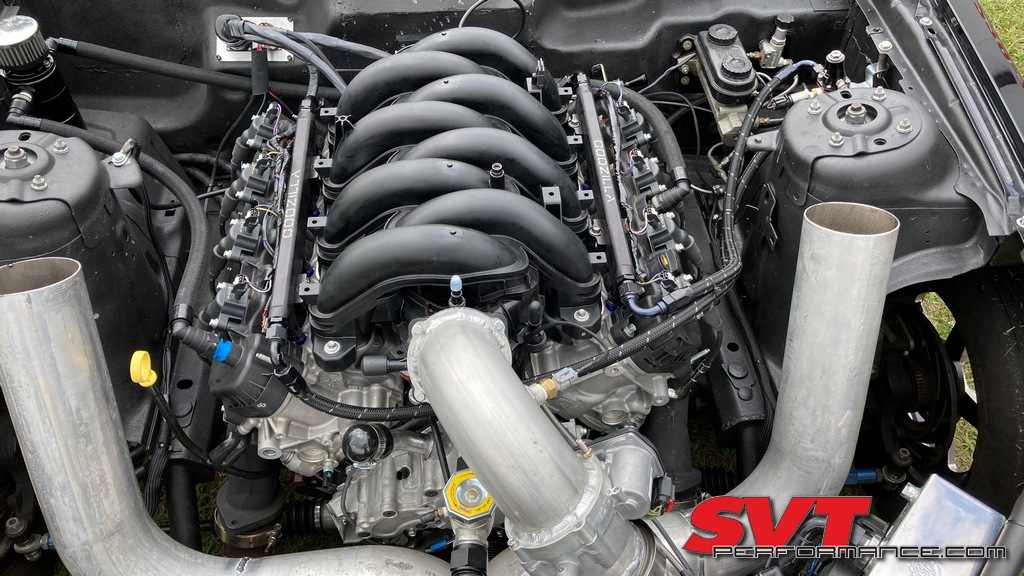 The bullhorn exhaust is cool, but the throttle body mounting flange angle on the factory manifold makes for some interesting fitment issues in a Mustang.​

The Five Bar guys are big fans of the Godzilla architecture due to its inherent simplicity. On a race engine you can often find yourself having to do some unintended major work while at the track. The pushrod design of the 7.3L requires far less time to tear down than a Modular based engine, making service in the pits a much easier process. Not having to pull the front cover in order to pull the heads can be a major time saver. 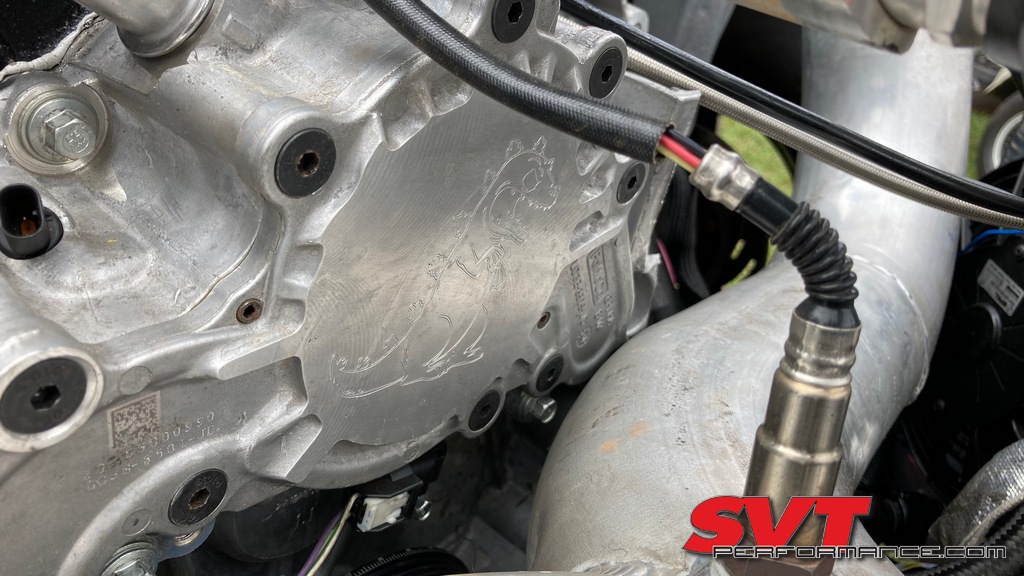 80/90's kids should have no problem identifying this custom touch on the front cover.​

After spending a bunch of time showing my around the car, the Five Bar crew finally got their class call and headed to the staging lanes. For such a radical looking, at least at this time, build; the car is very well composed. The 7.3L starts and idles like it came factory installed in the Mustang body, which says a lot about the Haltech system and the tuning contained within. Leaving the line with a very light foot (in order to prevent oiling down the track) the Five Bar crew manage to knock out a new personal best of [email protected]. After a bit more conservative tuning the car is now running in the 9.30s, still with an essentially stock engine.

If anyone ever doubted how compact the 7.3L Godzilla architecture is, this pic should put things in perspective. Think of how much space there is between the strut towers on a Coyote equipped S-197...
​
Steady progress is the name of the game here. Once the ‘Zilla’d S-197 has more reasonable ground clearance it’ll be able to handle a much harder launch. Any drag racer will tell you that the first 60 feet are were most big numbers are made, and that will be one less hurdle for Team Five Bar to overcome. I expect to see big things from this build in the future. If you want to keep up with the build I highly suggest you check out the Five Bar Motorsports YouTube Channel. If you happen to have any questions, post them up here. I’ll try to get the Five Bar Motorsports guys to answer them for you. 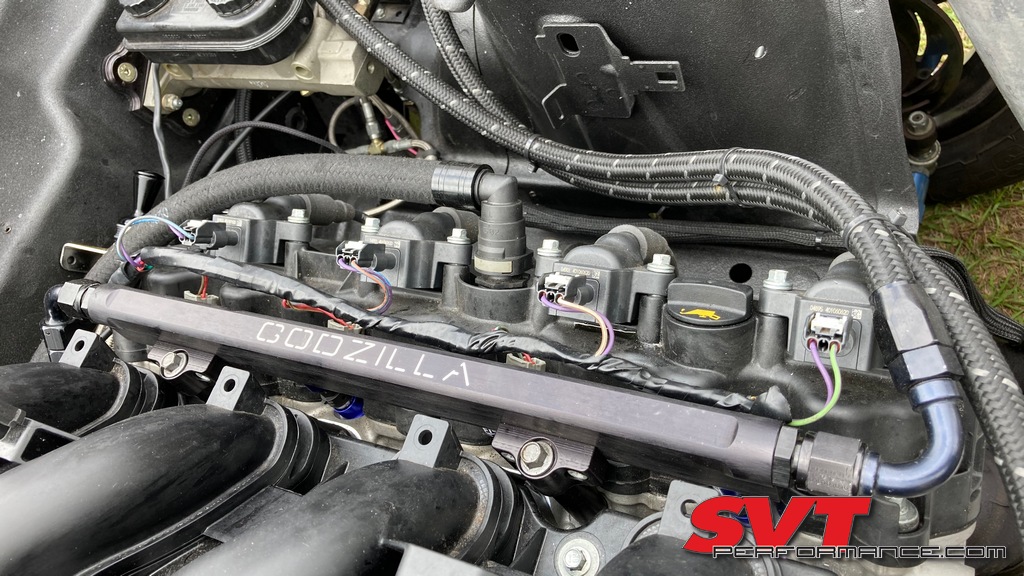 A set of custom fuel rails from Paul's High Performance supplies the injectors. 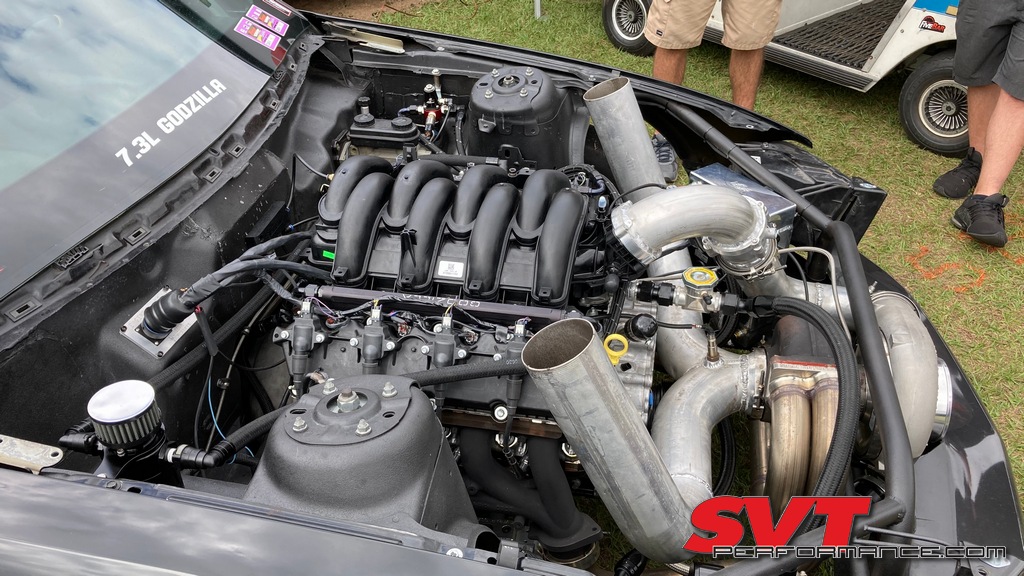 Just imagine this thing with an aluminum block and a Cobra Jet style manifold..., we need a modern Boss 445 Mustang. I hope Ford is listening.
​
-SID297 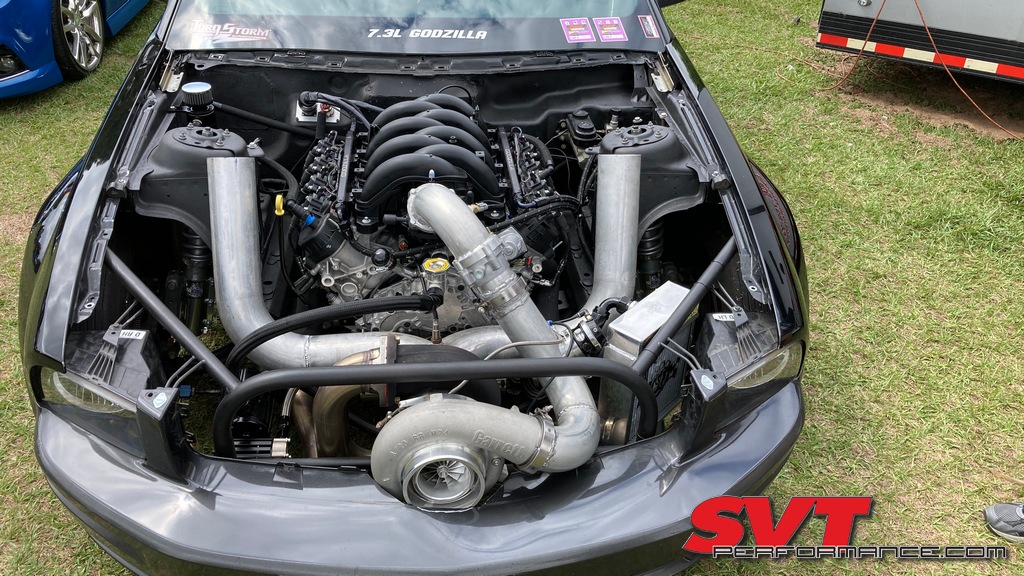 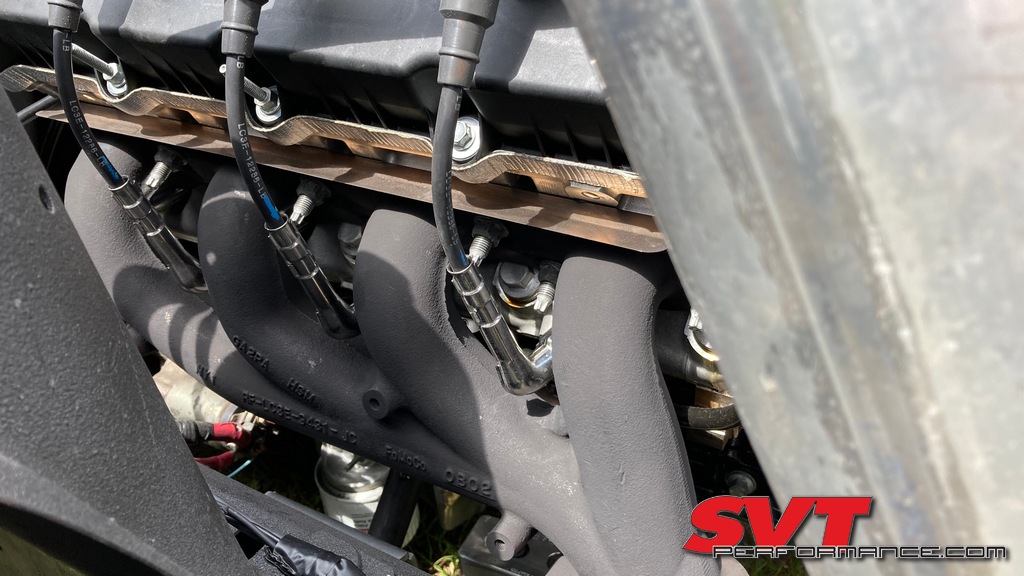 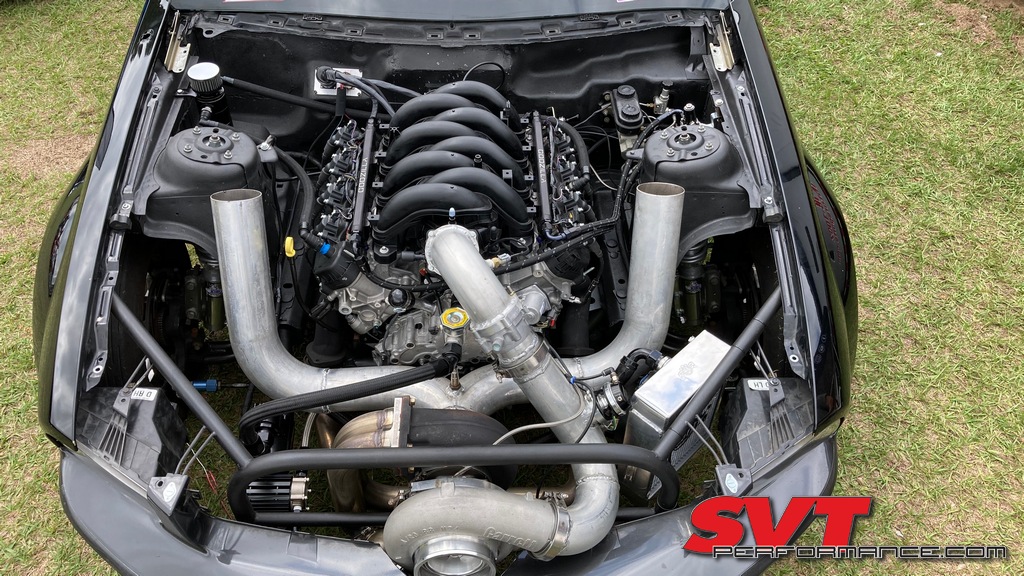 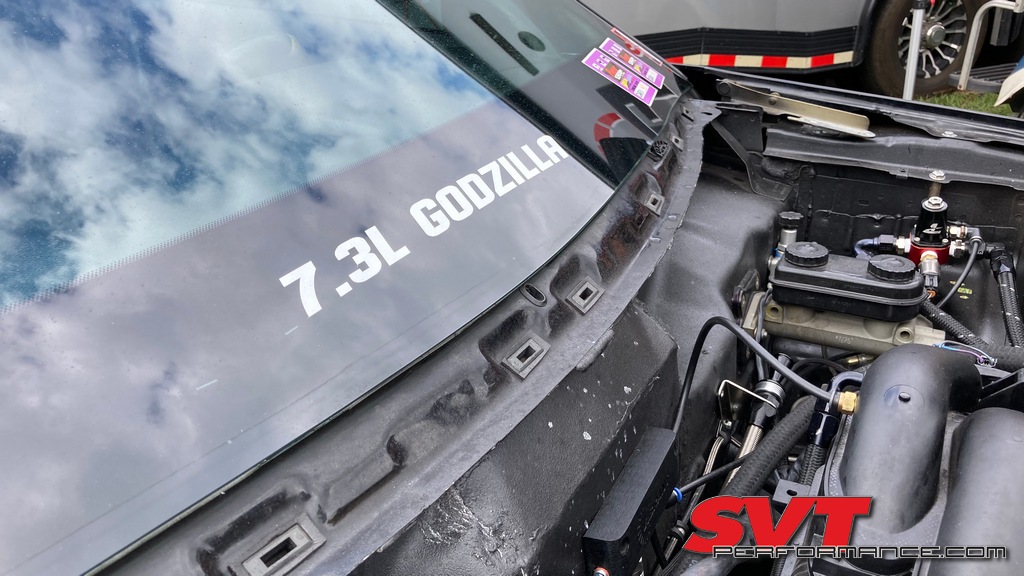 That's awesome. Such a good swap!
Killer swap! I knew the 7.3L was going to be a huge hit, regardless of size and weight
Looks fun! Once they figure out the oil pan issue, this motor is going to be in every foxbody in the country.

At 131mph trap speed, i wonder if theyre lifting 3/4 track.
Loving the progress on these sort of projects! Hope they keep at it and aftermarket goes crazy with them.
Badass, i really hope to see ford take advantage of this in other platforms before the end of ICE.
Being an 8qt pan from the factory I'm sure...well hope someone will come up with a pan with some side kick outs. Looking forward to see how this things ends up getting down the track.

FineLineMtrSprt said:
Being an 8qt pan from the factory I'm sure...well hope someone will come up with a pan with some side kick outs. Looking forward to see how this things ends up getting down the track.
Click to expand...

Be way easier to just convert to a dry sump and put the sump in the passenger floorboard.

13COBRA said:
Be way easier to just convert to a dry sump and put the sump in the passenger floorboard.
Click to expand...

Easy, but expensive.
Great write up. I know the Five Bar crew is hard at work on this. Very excited for new step.

It is expensive, but it solves a lot of issues.

My Comp Coupe has a dry sump system, it's amazing how much clearance it frees up.
somebody with the same intentions will get a oil pan figured out!! oB

klcmcse said:
somebody with the same intentions will get a oil pan figured out!! oB
Click to expand...

There's already some solutions hitting the market.
That’s a cool swap and well done, but to answer you title question of “What’s not to love?”:

1) 16V OHC cam-in-block
2) heavy cast iron block (you alluded to how an aluminum block would be awesome. I agree.)

Regarding Godzilla in general: How about de-stroking it to a 429 and putting a factory blower on it? It could be The final bow to the most extreme Mustang ever produced, the Boss 429!!! That would be a drop the-mic-event. Especially if they could make some semi-hemi style heads for it… . I don’t see Ford ever doing that, and if they did, it would end up being so limited that nobody could get one (see Continental coach door edition, Ford GT). I guess the original Boss ‘9 was very limited too, so there is some symmetry there I guess.