Status
Not open for further replies.

There is a story that goes along with this, but I want to hold off to see if there are any other experiences. :read:

Went ahead and google'd it. Waiting to hear OP's story on it now.

Grab your popcorn, here we go!

I was going to post it up last night, but I decided to see if anyone else had a story on him.

So yesterday I was helping a customer at my dealership, and when we pulled back into the parking lot there was this old Crown Vic that was spray painted red, green, blue, etc etc etc sitting by the front doors. Well, it smoking pretty heavily, and it didn't help that he would sporadically rev the engine. Well, I'm intrigued to say the least, but I didn't want to leave my customer.

When I walked into the dealership I told one of the salesman that was just standing there to go outside and see if the guy needed any help and to send him on his way. He told me that he had been sitting out there for 5-10 minutes talking to himself and laughing. Well, at that moment I was very interested to find out what was going on. So I politely asked my customer if they minded if I went out and talked to the guy for a minute, they didn't care because they were curious as well.

I get out there and the guy gets out of his car and starts talking to me. "I'm looking for a newer car. I need somethin' fast". (I love conversations that start out like this). So, I started asking him questions about what he was looking for, and it turned into him telling me about his POS. Anyways, I had to ask (after you see the pictures, you'll understand) what he does for a living. He told me to guess, and the first thing that came to my mind was that he is a bounty hunter.

He told me he wasn't, but it was close and to guess again. So I started examining his car a little closer. It had things like "Sheriff __________ is a baby raper", "Deputy ____________ is an arsonist", and "Dirty Pig Tour" painted on it; and his license plate was registered in Oregon. So, I asked him if he traveled the country exploiting dirty cops. He said yes. Then that's where it got interesting. He told me he made videos and to look him up online. I didn't pay much attention because I just wanted him out of there.

He explained to me how he has locked up a bunch of cops and that he has friends on the inside that "wack" them. (So I'm thinking this guy is a complete nut job and needs help.) I am trying to think of something to get him to leave, but he legitimately wants to buy a car and is not going to willingly leave. We talk some more and he starts pointing out all the policemen names painted on his car and tells me stories about each one of them and how he busted them. (I'm still thinking this guy is full of BS).

Well he comes in to the showroom and I immediately tell him that I am with customers and that this other salesman (he was still standing there) would answer whatever questions he had. While they were talking I went in and called the local police; they immediately knew who I was talking about and described him to a T. He had been camping out in the parking lot across the street for about a week and harassing the officers. They told me that he was dangerous and to stay away from him.

I went back on the showroom, made sure all of our other customers were taken into offices or directed towards the service bay (clearing the showroom). Conald was talking on the phone, while video recording himself to a buddy about getting a car. Well the buddy told him to get a Dodge Charger because "it has 4 doors, is fast and you can wire stuff throughout it." Conald asked if we had any, I told him no. He asked if there was a Dodge dealership around and I said yes about a half mile down the road.

He thanked me and walked to his car, revved the engine numerous times, honked the horn and did a parade wave like he was JFK while he drove off. The police pulled in the other entrance when he was leaving and soon was off after him.

He has 10+ YouTube accounts because they will randomly get shut down. Below are the pictures of his car I took and a few of the interesting videos I found. Yes, he talks like this ALL the time, it is not an act...and yes, I think he needs medical care. 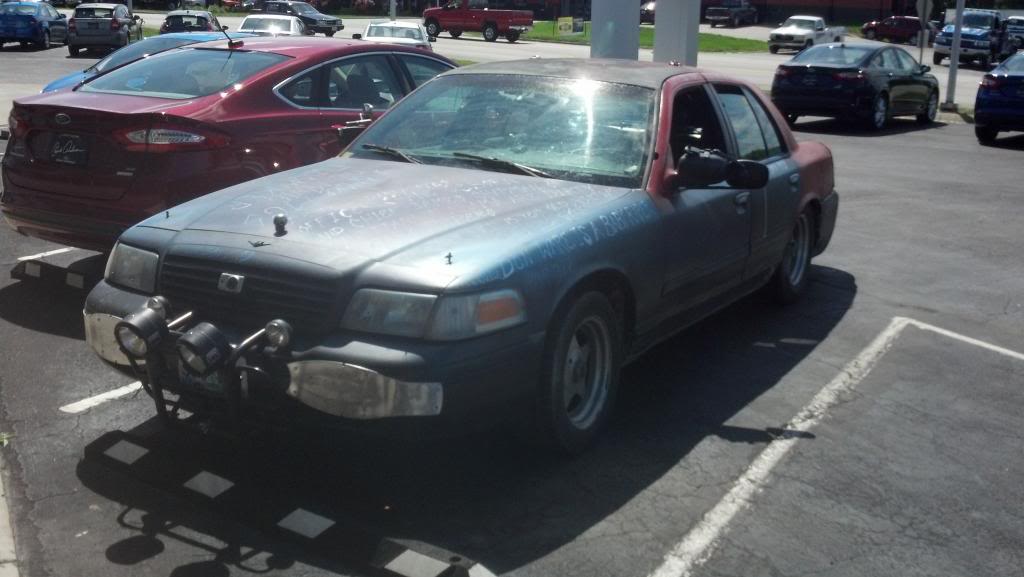 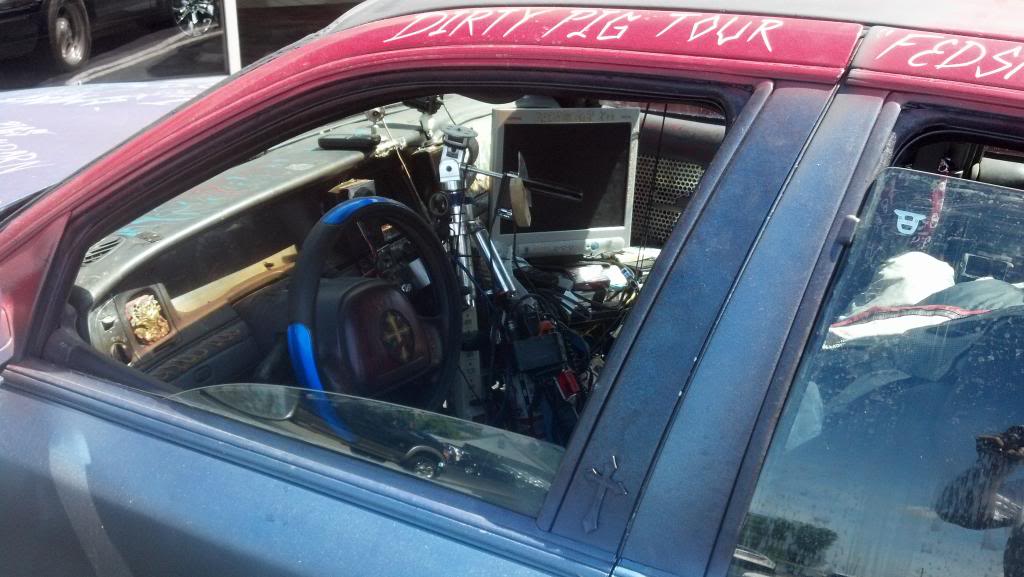 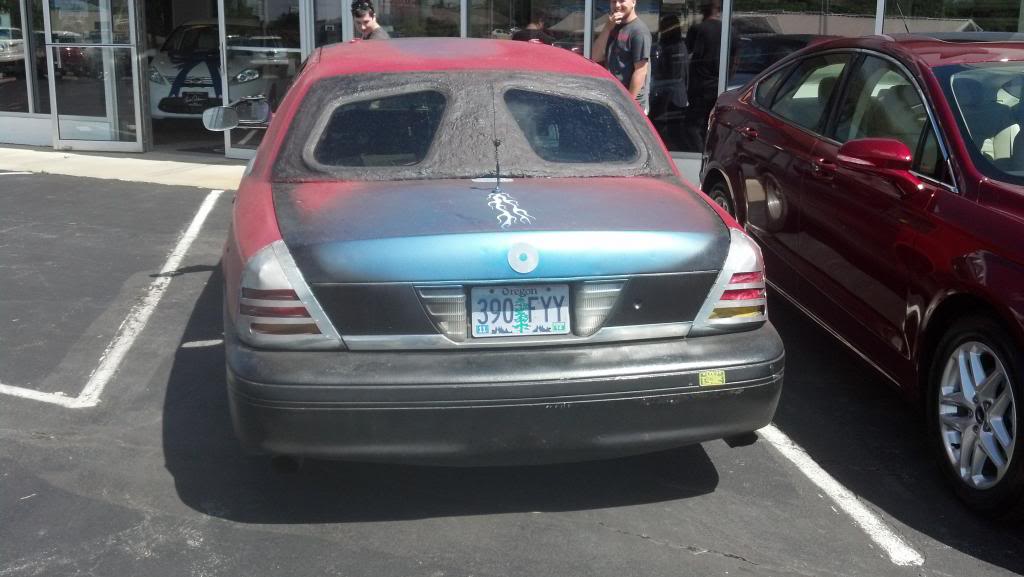 A man of the cross I see. You are right, he probably needs help and won;t get it until he hurts someone.

DaleM said:
A man of the cross I see. You are right, he probably needs help and won;t get it until he hurts someone.
Click to expand...

I would hardly say he's a man of the cross. lol
P

Wow. I dunno why you didn't trade it in just for the wow factor when you put it on the lot for resale.

PaladinMan187 said:
Wow. I dunno why you didn't trade it in just for the wow factor when you put it on the lot for resale.
Click to expand...

I can't remember which video it was, but I guess he use to ride a bicycle that was all equipped with recorders and cameras until he got this car.
H

I thought he was going to smoke the filter on his cig. Or bite it off.
Dudes too mellow for me.

Wonder if he's justified. I knew some dirty ones.

RSbeast said:
Wonder if he's justified. I knew some dirty ones.
Click to expand...

Well, I'm not saying there are not dirty cops out there, but this guy is mentally ill.

He told me that he had 10+ YouTube accounts because they kept closing them...when in reality I don't think he could remember the passwords.

No, I mean dude's batshit nuts. No argument there lol.

But has he been wrong and is he actually evil per say?

I guess it'd be interesting to research his claims to see if he really did some good.

RSbeast said:
No, I mean dude's batshit nuts. No argument there lol.

But has he been wrong and is he actually evil per say?

I guess it'd be interesting to research his claims to see if he really did some good.
Click to expand...

Yeah...possibly, I'm not sure how you can look it up. Here's his information on one of his YouTube accounts.

My real name is Conald Petersen, my freinds call me the Herkster, like my good buddy Jeff Sadd, that used to be chief of police in Harvard Ne, until he ran into my wire on record, then I had to smoke him for three counts of attempted arson, since the I've exposed so much crap that I just use Jeff Sadds name now to expose records, in honor of the poor guy, americans you can ask Jeff Sadd, when you screw with the Herkster it never ends, do you remember our little talk Jeff,? it really never does end! retired C.I. double agent, 22 years exp. are you ready to go on record kids? Sellers if Leal don't talk to me tonight they'll be a noose hanging on the beach for Christmas, try me out, its going up anyways, because CNNs been hiding news! the noose stands for C____, N_____, and More N______ like chief Mike Sellers! Merry Christmas kids! it don't stand for black people it stands for pure B______ right officer Leal! can you feel me yet? these records are kinda hot?
Click to expand...

I think you did too much tic LSD acid

Status
Not open for further replies.