wife and i just left the movies and were headed home,
taking it easy. approaching a two lane left turn at a
light, i take the outside as there was a Cherokee in
the left lane (regular late 90's XJ Cherokee).

rolling up, the light turns green and we continue on in
second. the Jeep gets moving just as we pass by them.
around the turn i was running something like 2k rpm's,
nothing loud. before we straighten out i heard the
6cyl Jeep stomp on it!

dude (i guess, couldn't see the driver) keeps his foot
in it as we're accelerating up to normal speed. the Jeep
pulls even and he's still WOT!

my wife looks over and says "is he trying to race you?!"
i give it a little throttle blip to see if he was for real and
NO SHIT, he never let up! laughing i jump in it and run
second up, shift into third and give it just a little bump.

just up the road there are two more lights before going
into a single lane. i stay in the right lane to see if he
would pull along side of us. really i just figured he was
messing around and would be cool about it or something.
no luck, dude stayed well back.

kill is a kill i guess :shrug:

... wife says "what did he think would happen?"

Probably just wanted to hear you get into it, or needed motivation for a 5.0 swap.

FortLewisCobra said:
I miss my XJ...

Probably just wanted to hear you get into it, or needed motivation for a 5.0 swap.
Click to expand...

haha, i've got a bone stock XJ sitting under the car port next to my JK. my son now has our XJ that's on 37's.

:bored::bash::nono: so do you pick on prius' too

03redfirevert. said:
:bored::bash::nono: so do you pick on prius' too
Click to expand...

when i can find 'em

ArmedSuspect said:
when i can find 'em

Funny....even funnier, I own a 2000 XJ Cherokee for my daily driver plus the Cobra. I would have NEVER tried a S/C Cobra in my Jeep. Wonder in the fool learned anything from his major let down when you rolled by him! LOL
L

i'm not sure what it is about the people in my area... (well, actually i am but i'll leave that for another time)

Friday evening i had some kids in a 2001-ish Blazer try to get me to run. they kept slowing down next to me then gunning it until they were a bus or two ahead, repeat.

fresh off my Jeep kill i decided to let the Blazer go... never even revved it up.


my Jeep eater parked next to my... Jeep 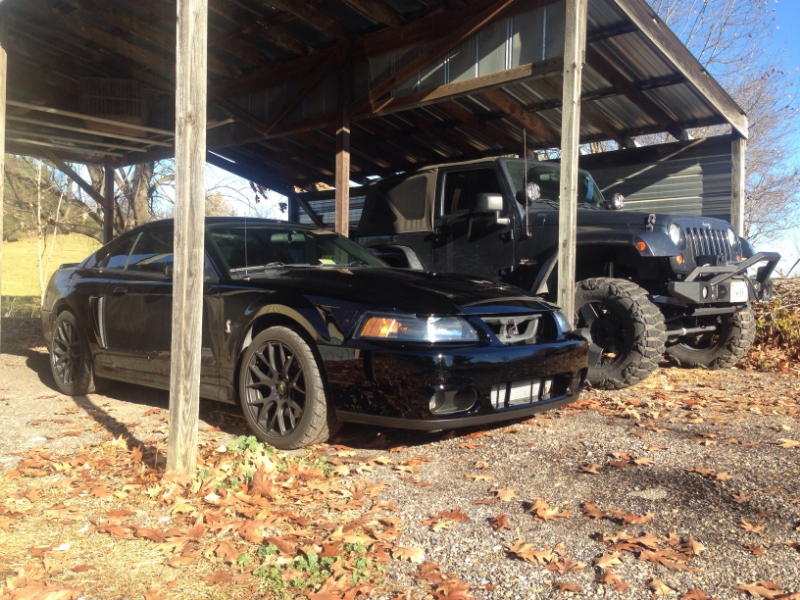