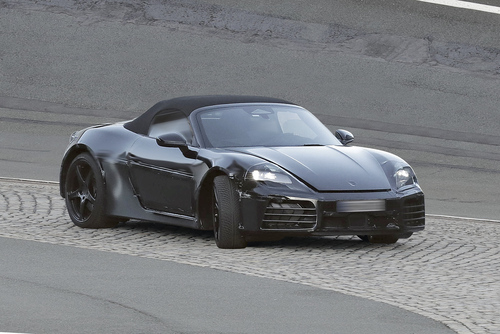 As the company has confirmed a couple of months back, Porsche’s third EV model and first electric two-seater will be the next 718 Boxster and Cayman. While the 911 isn’t expected to adopt EV technology until the end of the decade, the next-generation Boxster and Cayman will be exclusively battery-powered when they arrive as ’25 models in late 2024.

“We are stepping up our electric offensive with another model,” Porsche boss Oliver Blume said in March. “By the middle of the decade, we want to offer our mid-engine 718 sports car exclusively in an all-electric form.”

Porsche went on to say that it is currently developing high-performance battery cells with the Cellforce Group that are expected to be ready for series production in 2024, presumably just in time to appear in the new 718 Boxster and Cayman twins.

Porsche had already dropped a huge hint about the future of the 718 when it released the Mission R concept last year—and these exclusive spy shots prove the production car takes massive influence from the concept. Though allegedly a study looking into a possible future racing car, the concept showcased the styling of the next-generation production car and primed us for the fact that it would come only as an EV.

The all-wheel-drive concept promised 1,073 hp in qualifying trim and 626 hp in race tune, thanks to a 429hp front motor and a 626hp rear-motor setup. However, expect a less-powerful, single-motor, rear-wheel-drive version to be offered alongside the first-ever all-wheel-drive 718 when production starts in late 2024.

Although Porsche is investing in clean-fuel technology that could extend the life of the combustion engine, almost 40% of Porsche’s 2021 output was electrified in some way, and it wants fully electric cars and PHEVs to account for 50% of its global sales by 2025, rising to 80% by 2030. 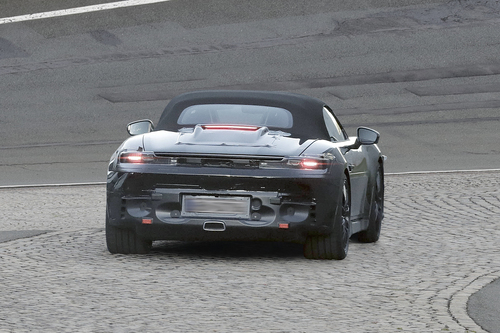 Unless Porsche has figured out how to produce units using renewable energy it’s all a shell game to pander to. Mine and erode the earth gaining minerals for the batteries n fossil to run aspects of the production plants.

I am very interested in the awd focus and output of torque in comparison of battery life. I think if there’s something to be had from their on-track focus brought over to the consumer side that’s aiding in this visionary process.

From the front it looks like a baby Taycan.

Love my Taycan Turbo S...just wish it ran low 9's like the plaid instead of low 10's...lol. Either way I never worry about racing anyone light to light.

If it's all-electric, why does it appear to have a center exhaust outlet?

Anyone have a strap on my girl can use on me?

TerminatoRS said:
If it's all-electric, why does it appear to have a center exhaust outlet?
Click to expand...

So the fake sounds can look like they come outta somewhere

Pribilof said:
qualifying is probably max effort for single lap while a race tune has to last many laps
Click to expand...

This is what BMW used back in the turbo F1 days with the M12 engine. Crank it to the max on boost to a claimed 1400+hp to qualify then change the engine and turbo before the race and set tune to 1000hp to last the full F1 race.

Brutal videos on Youtube of guys wrangling the Turbo F1 cars around. Just look uncontrollable at the limit.