Terrible timing but I'm still glad to see it happening. So I have a good friend that sent me some details that he's dug up based on VIN/HVBOM. It all started with a VIN that was exposed this week. 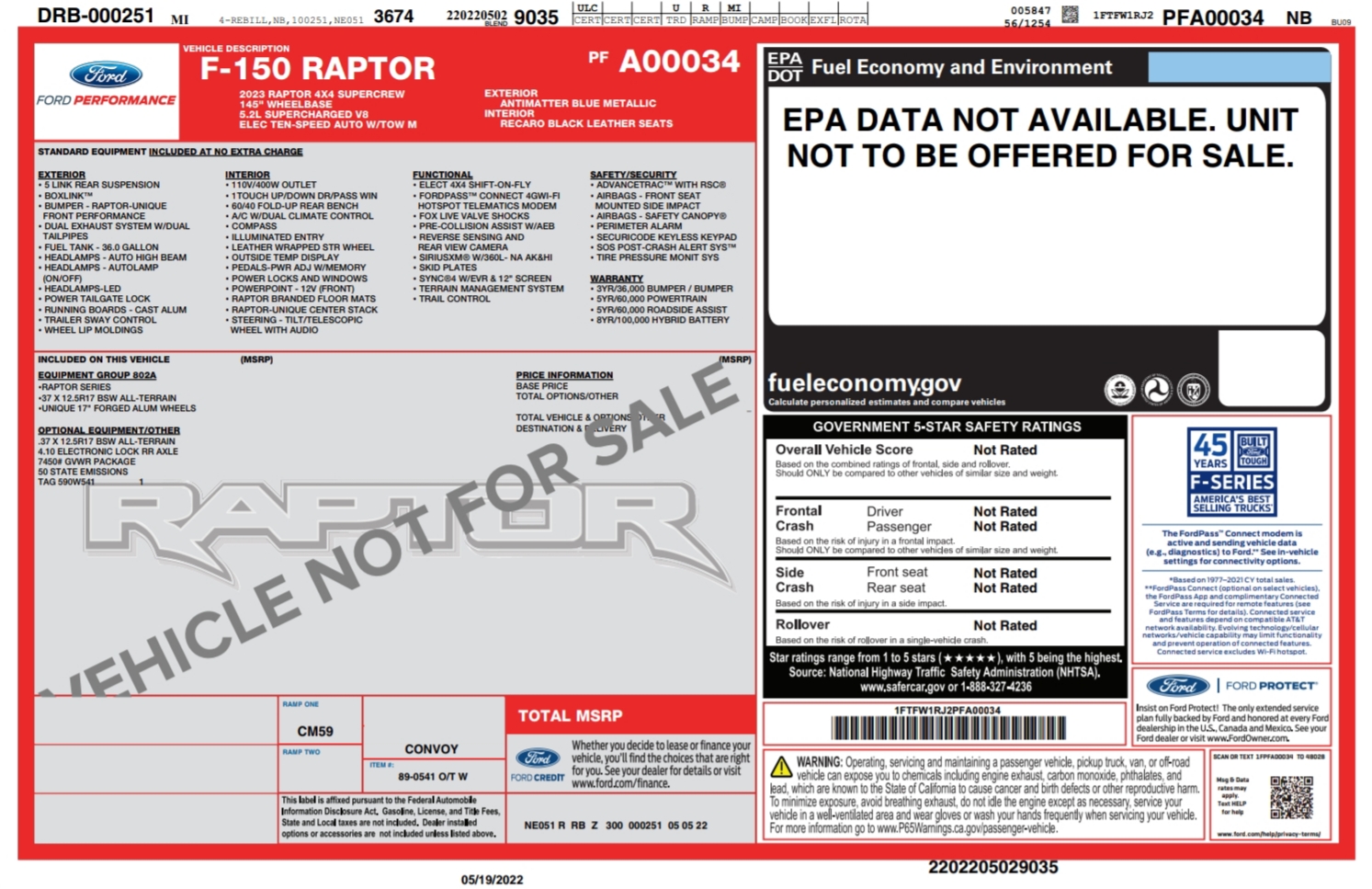 There was a shot of the engine that popped up too. Interesting that there are no niche line names in the usual spot.

Anyway, he mined another VIN and sticker. 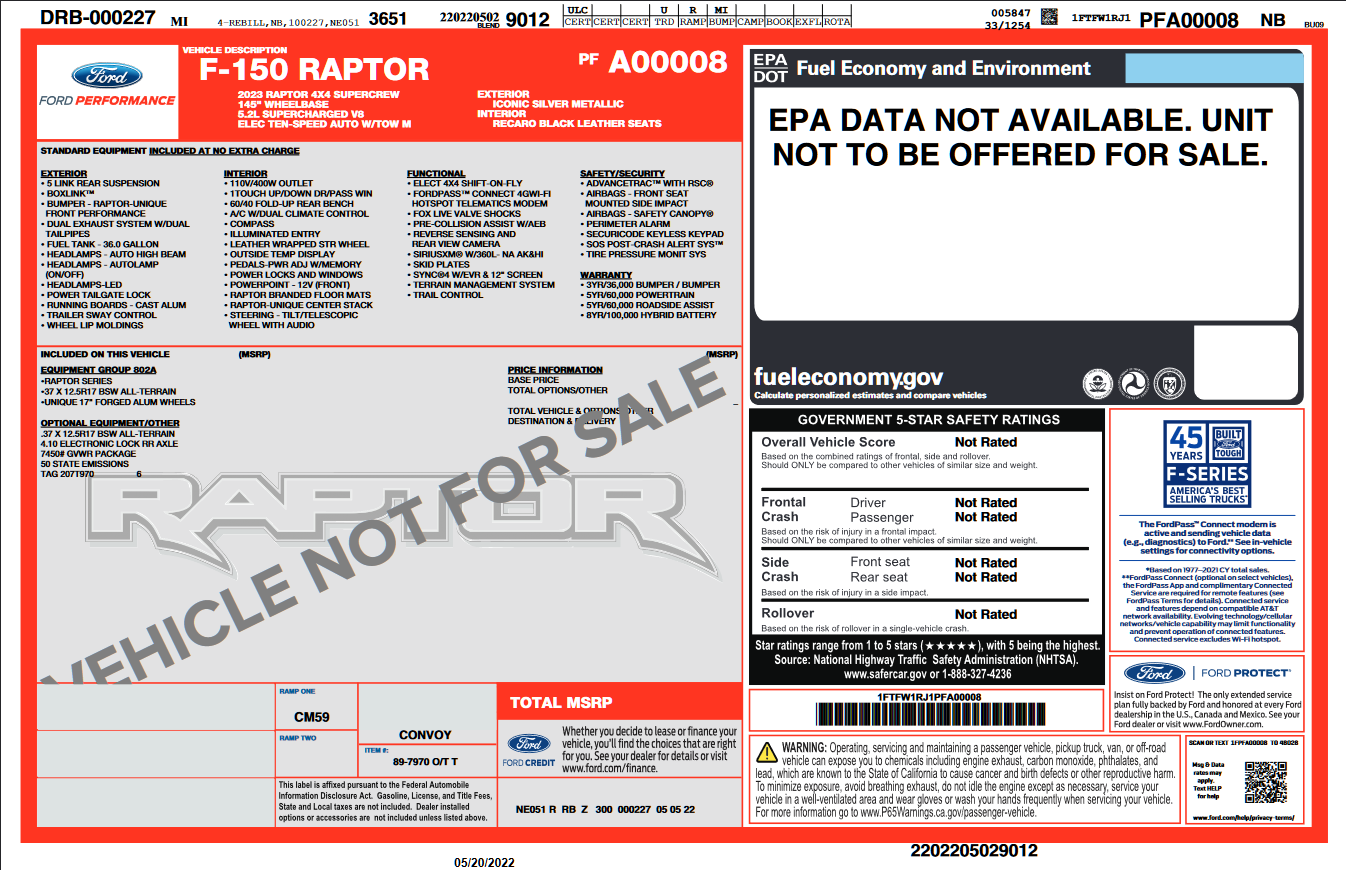 He then compared the Raptor build data to some '22 GT500 data, using the part numbers he was able to acquire via the VIN and sent me the following details:

If he finds more I'll be sure to post it up.

Could this thing actually get better gas mileage than a GT500? No way, right? Ten speed auto after all but heavy as shit...
Last edited: May 20, 2022

Tob said:
Could this thing actually get better gas mileage than a GT500? No way, right?
Click to expand...

i mean they probably weigh about the same these days

Is it odd that the sticker mentions the Hybrid Battery Warranty period? 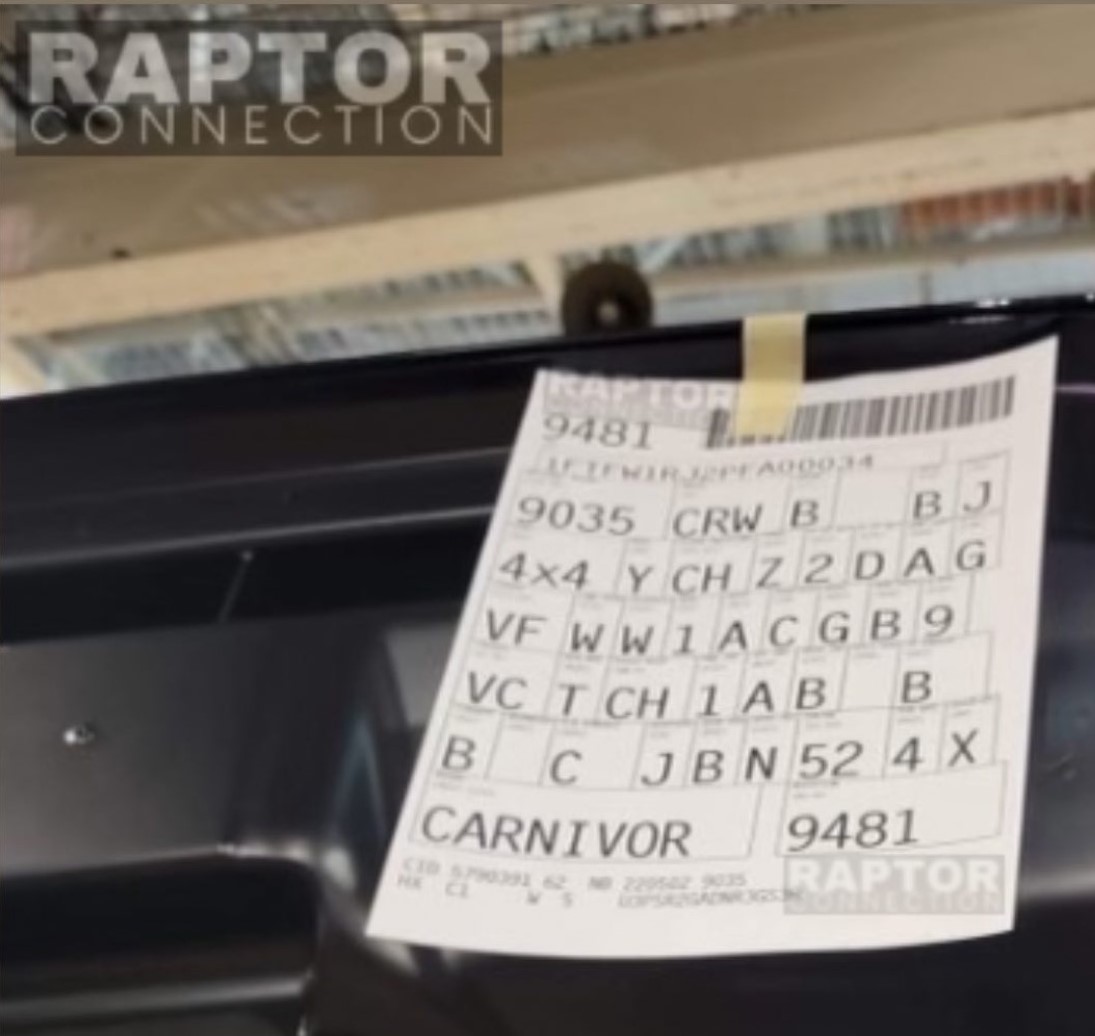 Sounds like it’ll be a fine truck. I’m looking forward to the specs and how it’ll compare to its rival. I bet a predator based engine with the 10speed will be a deadly combo.


Sent from the twilight zone…

Don't be misled by the mention of the hybrid battery on the sticker. It is shown on other non-hybrid Ford vehicle stickers as well.

I'll be interested in knowing more about the block.

Can’t wait to see the ford dealers doubling the msrp with their ADMs.

Matts00GT said:
Can’t wait to see the ford dealers doubling the msrp with their ADMs.
Click to expand...

Maybe a solid recession will make these affordable. I would love to have one. Thanks for posting. Very cool


Sent from my iPhone using svtperformance.com
I

ToddW702 said:
Maybe a solid recession will make these affordable. I would love to have one. Thanks for posting. Very cool

That will be my only chance for getting one. If I could get an allocation I would cancel my Bronco order that I have been waiting on forever.

Damn near impossible to get a Gen3, this is going to be damn near unobtainable.

I’d have one of these in a heartbeat over the TRX I’ve waited 7 months on…still think the raptor looks better. But, I’m not even going to bother…same reason I’m in a camaro instead of a GT500(besides the manual), the thought of fighting for an allocation and against what will be absurd ADM is a huge turn-off.

can’t wait for the savagegeese review though

Im just curious how much this will weigh? Actually nvm, adm on this is going to bend everyone over.

Now if only chevy fixed the ugly af silverado and put the LT5 in it. A truck civil war would be sick.

Now only if MSRP would be the real price when it hits showroom floors!

Damn this thing will be bad ass. Pretty sure it has to get the 10A right ?TRX is toast. It will be heavier with less power.

Serpent said:
Now if only chevy fixed the ugly af silverado and put the LT5 in it. A truck civil war would be sick.
Click to expand...

I completely agree. Chevy needs to join in on the action. A raptor competitor from GM is long overdo.


Sent from the twilight zone…