Who else has given up two wheels?

By that I mean motorcycles.

I have been riding for several years, but back in 2015 I dedicated my time to only riding on the track. Riding on the streets here in AZ was mentally draining, always being hyper aware of each surrounding, always looking for an out just in case. After a few years of only track riding I missed the early morning rides out of town to grab breakfast with my friends so I decided to register and insure my bike for very limited street use.

A few days before Christmas I decided to take my bike up to the shop to get some advice on tuning etc.... That's when my luck turned.

I was heading home in the HOV (high occupancy vehicle lane) traffic was a nightmare going very slow and I was going with the flow in the HOV lane which was faster than the other lanes. A car pulled into the HOV lane and I had enough distance to slow down but I was on the brakes hard. Once the car saw me in their mirror they had a panic and hit their brakes. This is when I started to doubt the situation. If that car in front of me didn't nail the gas I would hit it. If I swerved left I would risk hitting a concrete barrier on my left.

I decided the best plan would be to release the front brake and stab the rear to go into a lowside. Was I right? No, the car did end up hitting the gas and moving over a bit so I would have missed him but that didn't happen till I was already in a slide. I wasn't willing to risk it though.

When going down I ended up hitting the helmet on the ground pretty good, concussion followed. I was wearing gloves, helmet and Jacket. I had some roadrash on my knees and leg. I also ended up breaking two ribs. Same two ribs I broke a couple years earlier going down at the race track in an event.

I am now healed for the most part - ribs are still uncomfortable. I am one to not be so serious all the time however it hit me really hard as I was dropped off by my good friend at home, I sat on my couch thinking how the outcome could have been different. How quickly things could have changed. At that moment I decided I am giving up two wheels for good.

I hope those of you on two wheels always stay safe, ATGATT!!! Anyone else give it up after a close call or going down?

I am glad that you are OK.

I've thought about it off an on. I realized this year I'll be going on 11 years of riding. I went down in 2010. Shattered my collar bone, split my scapula, had a quarter size hole in my foot where the brake lever stabbed me (which healed up quite nicely, actually) when the bike threw me off, and had to have a metal plate put in to make sure everything healed up right. Always wore jacket except that day SMH. I did have my helmet and gloves though thankfully. If I hadn't been wearing my helmet, had I lived, I would have had some very noticeable damage to the skin on my face and probably a skull fracture.

Anyway at this point if I gave it up it'd be out of boredom unless a family comes along at sometime in my future. Doubt I'll ever own another one after the current bike.

I gave mine up. Loved riding, still wish I had one on nice days...but I don't miss feeling like I could die at any time.

I gave it up. My interests started leaning towards cars, it was really hard initially during summer. It was a genuine weight off of my mom's mind when I did sell it as it was only a few months before my buddy was killed by a guy who ran a red light.

Now I wouldn't even ****ing consider it with all the shit drivers in Colorado. 5 years ago, hell even 3 years ago it was significantly safer than it is now.

Never will I ride a motorcycle. I respect the decision of those who love them though, but out here in Cali it's simply to dangerous. A 21 yr old kid was just killed four days ago out here riding in the mountains. Head on collision with a F250.. He had his license for all of a week.. Granted it was his fault, but still. Shit literally scares me.

I used to ride to Colorado on my R6 all the time since I bought it new in 2004. After the recent traffic increase the past few years and a back injury I traded my R6 for the 99 Cobra title for title with a guy on craigslist. Never regretted it, and the wife is happy I'm not riding with the crazy traffic anymore.

Sent from my [device_name] using the svtperformance.com mobile app
R

I would really like to be able to hop on a road bike for day rides to Austin or through the country but I am 29 years old and I am not going to die because little Suzy was texting and driving.

13COBRA said:
You got lucky.

I gave mine up. Loved riding, still wish I had one on nice days...but I don't miss feeling like I could die at any time.
Click to expand...

This. Riding on the street has been dangerous since it started. But now, with all the distracted drivers, it's a suicide mission. Plus, once you go to track days, street riding is soooo boring.

The final dagger for me was when my daughter was born. I feel like it's pretty irresponsible as a parent to do something so dangerous when you have a child to take care of.

When I sold my sport bike and bought my HD my wife said no riding to work or on holidays. I was fine with that due to the amount of idiots I encounter driving for work.

Traded mine as part of the deal on the cobra. Deal breaker was when I moved to El Paso. Too many people and some of the dumbest drivers I’ve dealt with.

I do miss it though.

I rode back in HS when my dad had his Harley and Honda CBR1000. These last few years I was getting an itch to buy a bike for my daily commute until I had my daughter. I would love to have one to ride around town on, but the desire to own one isn't there anymore. I'll stick to dirt bikes once she's old enough to start riding to get my fix in.

Beers for the boys

Girlfriend already threatened to castrate me if I bought one. I figure being an idiot on four wheels is already enough.

Plus I enjoy being a man.

I've never been down before on a bike and glad you made it out of your accident with only couple busted ribs and some rash. Sounded like that situation could've been lots worse.

I've had R1's throughout my life. Then got into Harley cruiser scene for a couple of years, I wasn't a fan. So I've been without a bike for about 5yrs or so.

Went to Italy last August as I usually do every year. My cousin had a Ducati 959 and I would drool every time I saw it.
So essentially I bought my dream bike 2 months ago .. 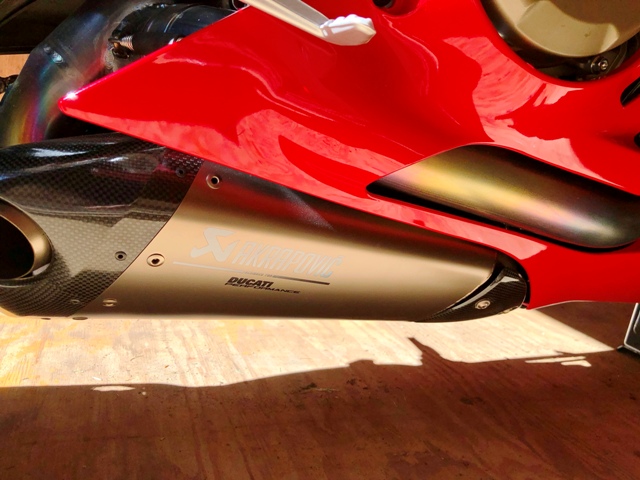 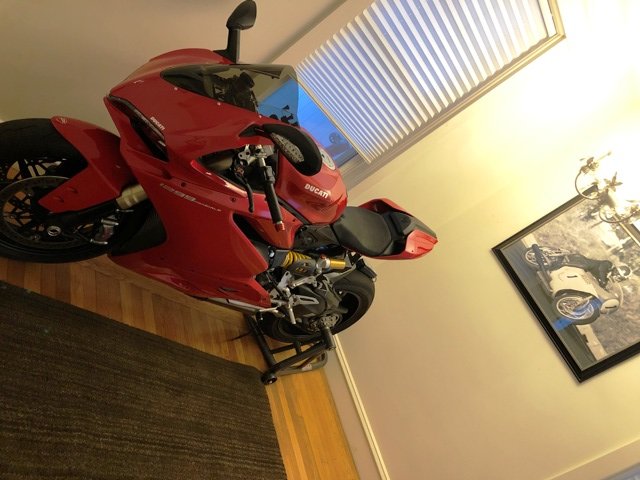 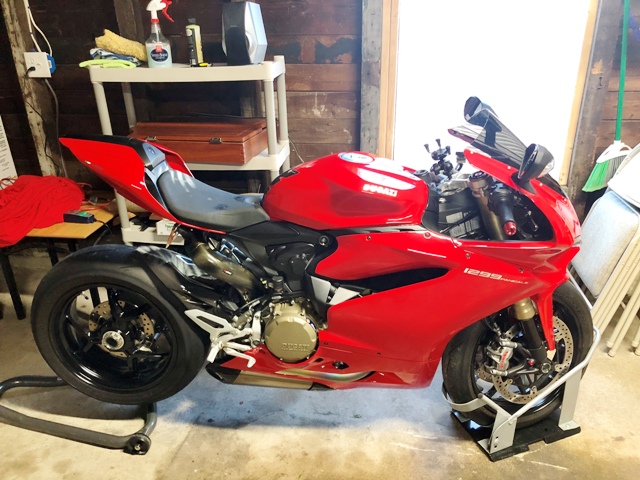 I was a motorcycle nut for 20 years. One day on a quick ride for lunch 'texting' Suzi almost killed my wife and I. It was coming around a curve so my choices were limited. I was on the very edge of the asphalt next to the shoulder and her bumper still narrowly missed my left leg. I told my wife after, I swore God intervened because we had no where to go. I can still hear the scream that teen let out when she looked up from her phone.
I haven't ridden since.
Bikes are still up in the pole barn...will probably get rid of them this summer.

I don't ride, and never will on the street. Had to many friends that got killed or seriously hurt.

I gave up in 2014 all by my own. Wife loved to ride with me but I just lost the passion.
Add in some people I knew from bike meets dying in wrecks and looking back at how dumb I rode early on I got out before I ate the pavement.
Still have the bike in the garage, with tag that expired in 15.
Especially with mini me here now and seeing that fatal bike wreck last month think I'm done indefinitely.
Dirt bikes on the other hand I would like to get back into, just time is an issue.
S

I rode off and on for years beginning at 18. Back then, I was borrowing friends’ sportbikes until I could swing my own and bought a brand new ZX-6R after graduating college. I rode every chance I could and continued to do so after buying a HD. I sold that in 2006 to move to FL with the intention of paying cash for a new scooter after my house sold. Six months of seeing one fatal accident after another changed my mind and I haven’t owned a bike since. It didn’t help that soon after moving, I dated and eventually married an ER nurse.

Honestly, I lost track of the number of riding buddies hurt or killed on bikes. 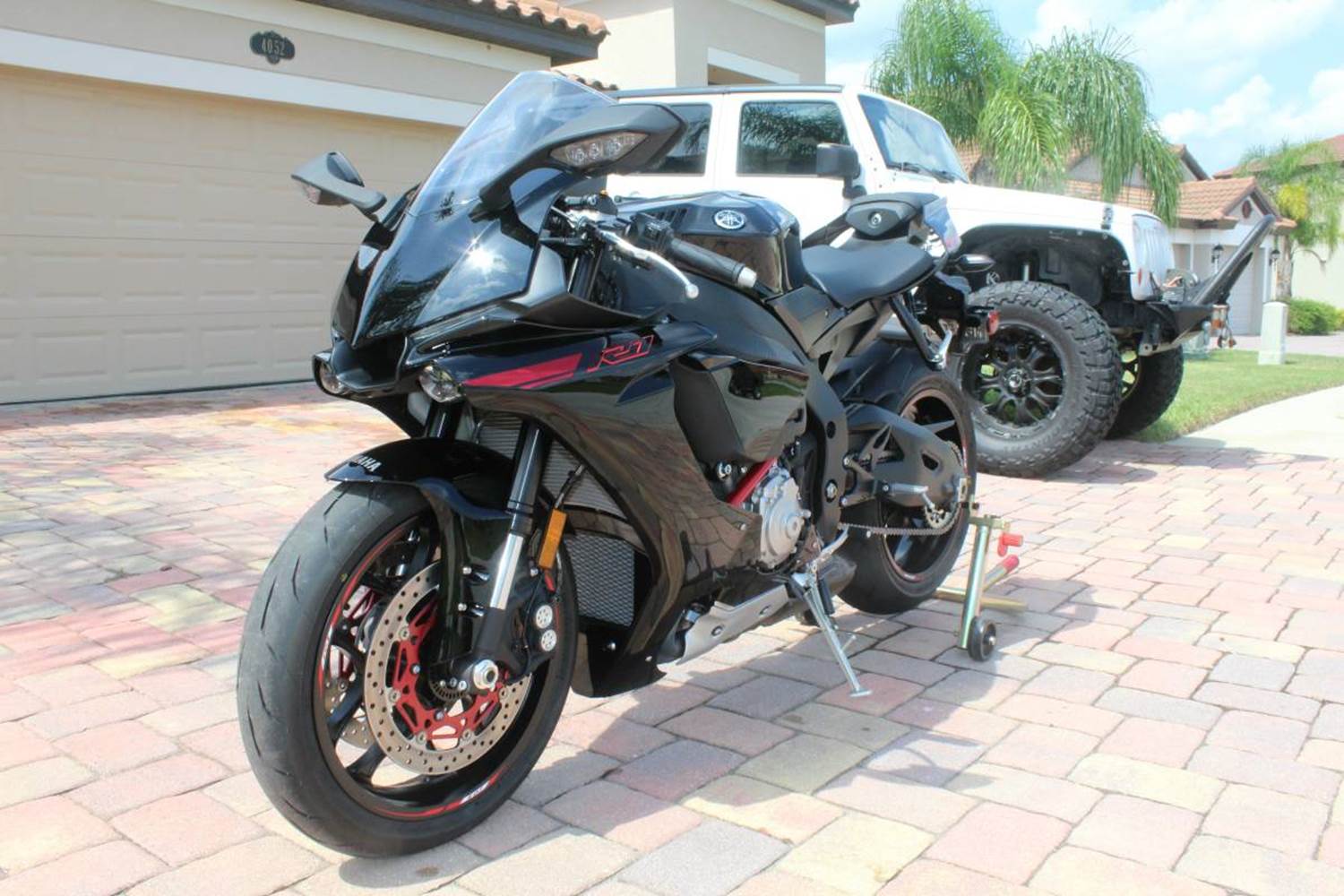 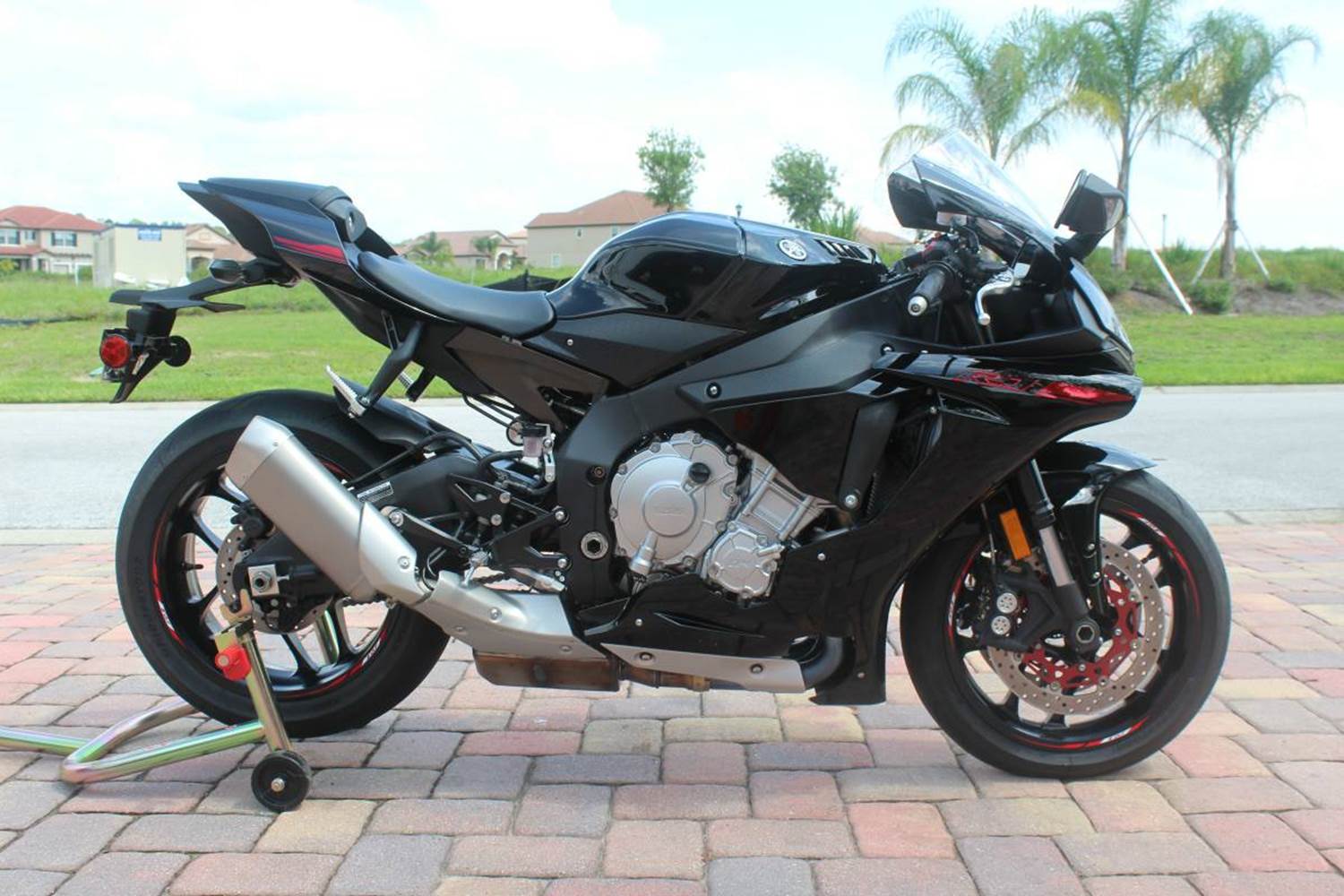 I had JUST bought my R1 prior to my accident with my cobra...I’ve had 300 people tell me to sell it due to danger.

I simply cannot do that. I do not ride it to / from work and I ride away from the city.

FL is scary because we still have older drivers who spent many years not being around motorcycles. On top of all the people who text and do not watch the road, I could not ride without being stressed.

Hell people go for miles at night here without any lights on.

Good luck but as my sticker says, "Motorcycles watch out for me." J/K