What makes a CEO outrageous? When he or she has the courage to try to change a company’s culture. This was the challenge facing Alan Mulally after he was named the new CEO of Ford Motor. He arrived in September 2006, just as the company was losing sales, reputation and a belief in a better future. Does this sound like mission impossible? Most likely. Changing a culture is one of the toughest jobs any executive can take on.

Choosing Mulally was surprising to Ford insiders and outsiders. He graduated in 1969 in aeronautical and astronautical engineering and joined Boeing where he built his career to become Executive Vice-President and CEO of Boeing Commercial Aircraft. He knew a lot about planes, but cars?
When Mulally joined Ford in 2006, the company was running on empty. To stay solvent, it mortgaged its assets and raised cash. This allowed the company to survive the worst financial crisis since the Great Depression. In fact, it was on Mulally’s watch that Ford won the respect of customers and citizens in 2007 by declining a government bailout – the only major automotive company to do so.

In addition, Mulally’s investor results were superior to those of the other Ford CEOs who served between 2001 and the present. (Chart II below). How did Mulally and his teams achieve these results? When he arrived, Mulally knew that Ford’s bureaucratic culture needed changing. To do this, he behaved in ways that might be considered “outrageous” in more traditional business cultures.
Some of Mulally’s practices were reported in American Icon, Bryce Hoffman’s book about Ford’s transformation. It described how Mulally hugged people in the halls and chose to eat in the cafeteria where he talked with employees about changes needed at the company. He set up weekly, mandatory in-person meetings for Ford’s far-flung top executives and expected them to candidly discuss their problems, as well as successes. He expected his teams to trust him with the truth.

When he realized there was no document in the company that featured all of Ford’s products, he ordered scissors, glue, paper and all the company brochures that featured different models to create the first ever all-inclusive product brochure for the board of directors.
How was it possible to know if Mulally was making progress in changing Ford’s culture? We read his CEO letters in Ford’s annual reports. These communications allowed us to see inside the corporate culture. We saw that Mulally’s letters were different from past Ford CEO letters.

First, his letters were personal. Mulally’s 2007 shareholder letter used pronouns like “I” and “You”. He referred to the “team”.
Second, Mulally laid out clear strategic priorities to restore Ford’s pride and profits. The company needed to: 1) restructure operations to be profitable at lower volumes and a changed product mix; 2) accelerate product development, while also reducing complexity and improving quality; 3) complete its financing plan; and 4) inspire accountable teams.

Third, Mulally was customer focused. Like the strategic shift inspired by Coke’s new CEO James Quincey, Mulally reminded readers that Ford would “build more of the products people really want and value.”
Fourth: Mulally set realistic expectations, writing: “From my experience at Boeing, I know it is difficult to see the momentum growing in the early stages of a corporate turnaround. But when you start with a solid foundation of teamwork and an unwavering focus on customers, the results can be dramatic.”
But even with these disclosures, Mulally’s first letter in 2007 was full of “FOG”, our acronym for “fact-deficient, obfuscating generalities”. Between 2001 and 2007, the amount of FOG in Ford’s CEO letters averaged about 90 percent, ranking them among the least candid companies in our survey of Fortune 500 CEO letters.
But Mulally’s 2008 CEO letter was a revelation. The FOG score in that year’s letter was just 22 percent, down from 163 percent in 2007. This was a sign that positive cultural transformation at Ford was starting to stick.

Did the market notice this cultural inflection point? No. As seen in Chart I, improved financials did not show up in the stock price until late 2009. Anyone buying and holding Ford’s stock in early 2009 when the 2008 annual letter was released – was rewarded.

How do we know that Mulally wrote the best letters and made the most money? The chart below shows the average returns for each of the Ford Motor CEOs between 2001 and the present: Bill Ford (2001-2006), Alan Mulally (2007-2013), Mark Fields (2014-2016), and Jim Hackett (2017 to present), who was recruited from Steelcase.
As you can see in the chart below, Mulally is the only CEO who significantly increased investor returns, and outperformed the S&P 500:


In addition, you can see in Chart III that Mulally’s FOG scores, during the six years he served as CEO, averaged the lowest among all four CEOs.

What can you take away from this analysis? The values, norms and beliefs that make up a corporate culture lead to actions that will produce profits or losses. Look for these underlying culture shapers when you read CEO letters. After all, words create the future.
Letters with low levels of FOG can reveal leaders who create motivational and safe cultures where, in Mulally’s words, “People [will] bring you their problems so you can solve them together.” 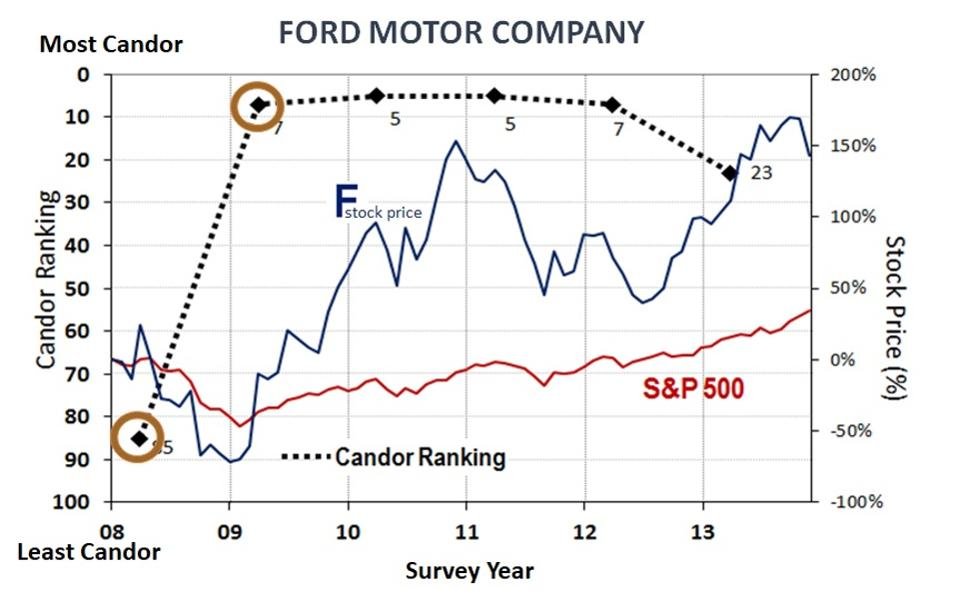 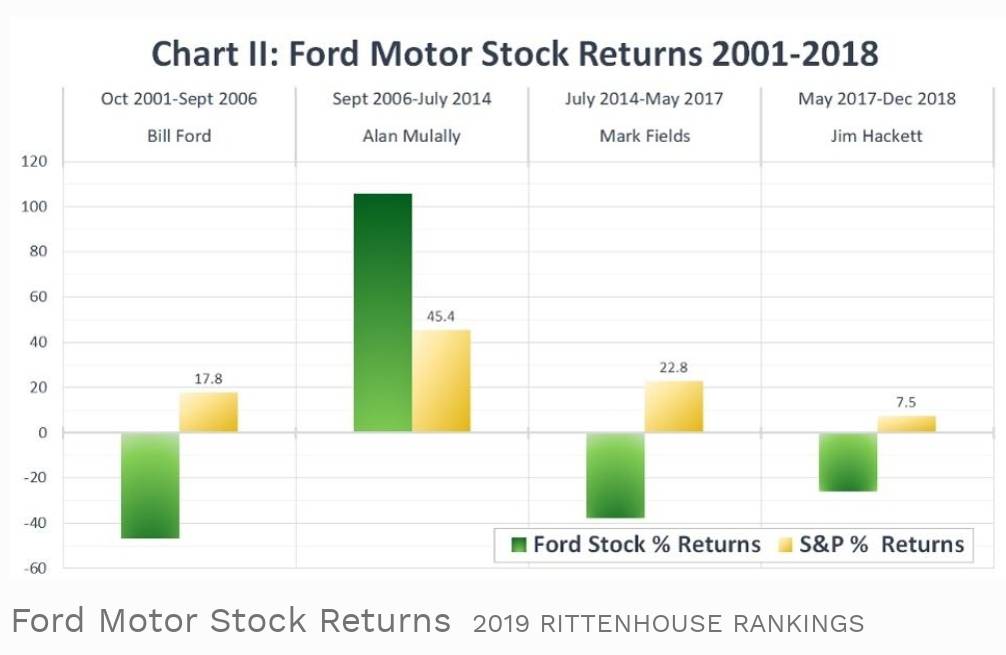 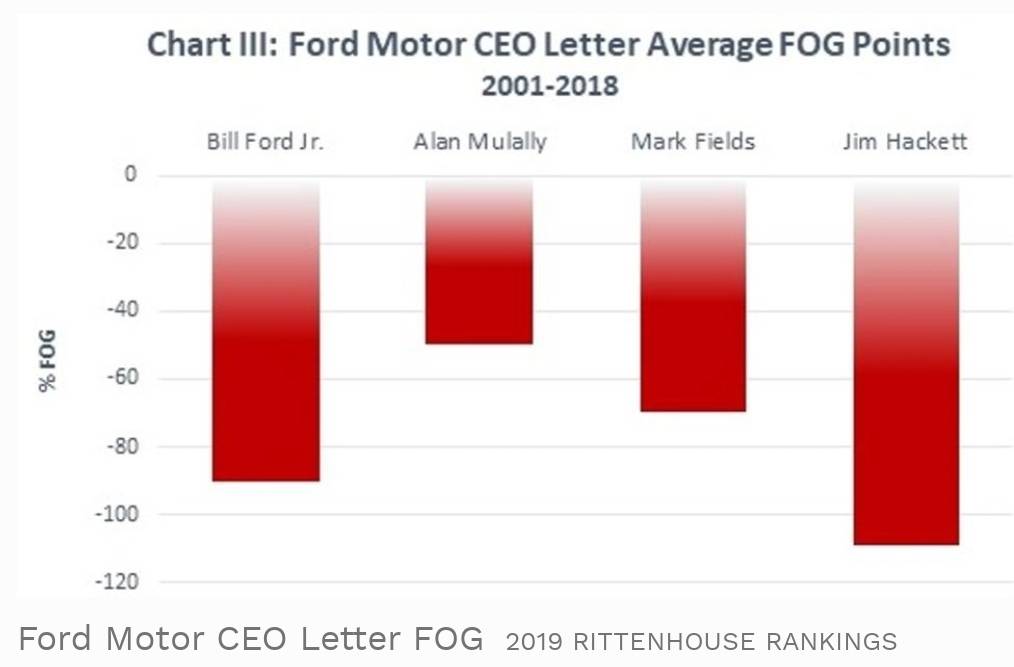 Sent from my Note9

Why am I not surprised that Hackett has more FOG than Ford?

Ford needs Alan back...though he's getting up there in years and I imagine he's ready to throttle back and cruise...

03Sssnake said:
Ford needs Alan back...though he's getting up there in years and I imagine he's ready to throttle back and cruise...
Click to expand...

Yes they do Hackett needs to go.

FoMoCo has done VERY well when charismatic, smart engineers who have worked their way up through the ranks have been put in charge.

When you have a furniture salesman who knows jack and shit about how to grow an Automotive manufacturer, believe me it shows.

This is on Bill Ford and the rest of the board of directors. Hackett may be a great person to head a future technologies R&D division that does general tech development. He IS NOT a good overall leader for FoMoCo.

Thanks to some very dedicated product teams (F-Series, Super Duty) Ford's bread and butter may help keep them going. They will not THRIVE until Hackett is replaced with a bright and CAPABLE CEO.

03Sssnake said:
Ford needs Alan back...though he's getting up there in years and I imagine he's ready to throttle back and cruise...
Click to expand...

Sent from my iPhone using Tapatalk[/QUOTE]

Without question. My Brother in Law in Cali has been an engineer at Boeing for almost 30 years and worked under Mulally. He was very successful and liked for the time he was at Boeing and did similar at Ford. I don't like Ford's leadership now and where its going. My last two new daily drivers have not been Fords.
S

American Iron, is a FANTASTIC book to read about what Mulally was able to achieve.