I was reading this thread:

and was wondering if there's been any new findings on a color that best matches the interior of my 04 SY cobra. I'm pretty sure it's the same color as most of the 04 cobras out there, correct me if I'm wrong.

I need to know what the best match is for the circled portion in the pic below: 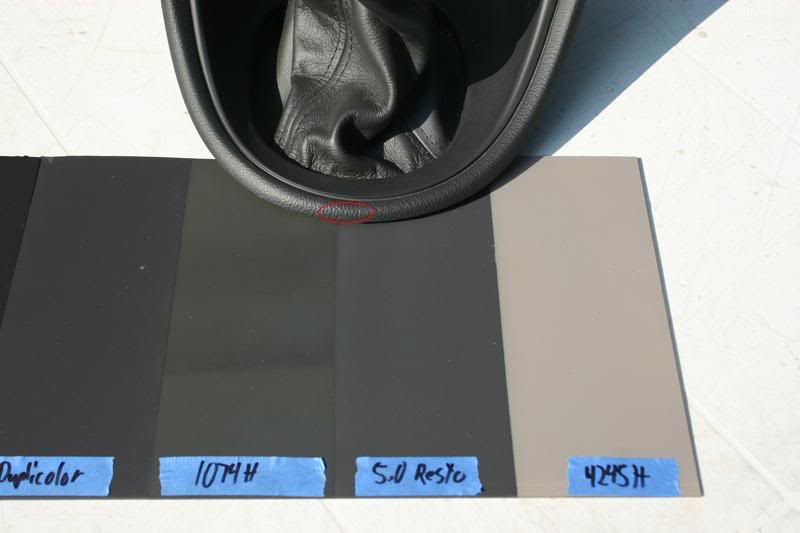 Hard to tell as the samples are splotchy..
G

Ok.. I went to the link and from the samples there, I think the 5.0 resto is the best match. I only looked at the pictures and did not read any of it.

The OP of the link I posted isn't satisfied with any of them. The picture is deciving becaues of the light source. I read that:

is a very close match. I'm probably going to give that a shot.
G

Are you only painting the textured part?

not sure if it's the same stuff that the Ford dealer sells or not. 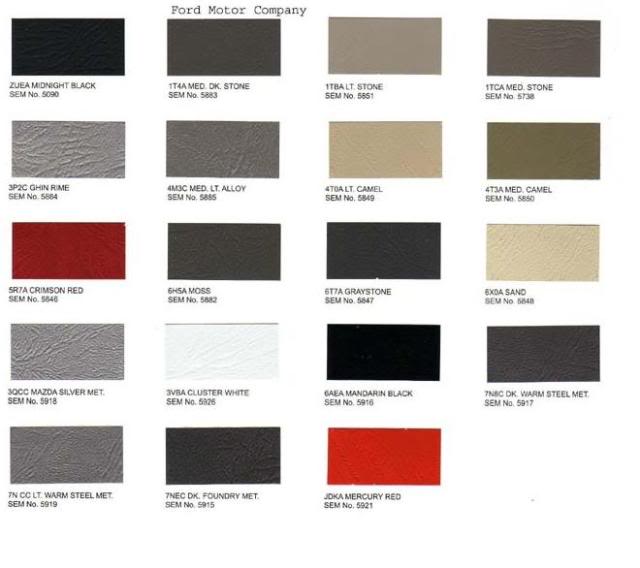 I just ordered the 17013 in areosol form. I'm hoping that that's the match for the shifter bezzel in a SY 04 cobra.

I think that page 41 in this PDF from sherwin williams better illustrates the true color of ZUEA midnight black. The pics in the post above this make it seem like it's flat black, which it isn't.

I'll try out the 17013 spray paint from vinylpro.com and let everyone know how good of a match it is.

please update this when you test it out. Great find!:beer:

Sure thing. I'll post some pics of it's color as soon as it comes in.

i painted my gauge pod to match that color... i used the ready mixed spray can from ford. It was cheap and I bought it from tousley ford.... came out great and can't even tell the difference!

^^ You have the p/n for the Ford aerosol from Steve?

mblgjr said:
^^ You have the p/n for the Ford aerosol from Steve?
Click to expand...

What I'm wondering, is why Ford only offers 1 color of interior paint with trim code ZUEA, when clearly the circled part is a different shade of gray than the paint on the bezzel.:shrug:

The thread linked to was mine actually. The lighting used was just pure sun light. I figured that would be the best to give representative results. I admit the whole comparison didn't come out like I wanted, but something to keep in mind is that it was more of a comparison than it was illustrating the perfect match. I wanted to show the differences because depending on who you asked, you got two different recommendations. Either M4JZ-19M547-4149H Charcoal Black or M4JZ-19M547-1074H Midnight Black. The biggest thing I wanted to do was illustrate the differences between the two. I then decided to throw in some others.

I'm beginning to think there are variances from one can to the next because other people have been happy with results from each. I was completely unsatisfied with the 50resto stuff. It came out way to light as you can see from one of my pics. The duplicolor isn't bad considering it wasn't necessarily designed for our cars. However it has a blueish tint to it.

Please post pics when you're done using the stuff from vinylpro.com I'd be very interested to see the results. I wish more people that were satisfied with what they used would post pics so we all could see. For picky people like me, this would help greatly.

Kobra Khan said:
What I'm wondering, is why Ford only offers 1 color of interior paint with trim code ZUEA, when clearly the circled part is a different shade of gray than the paint on the bezzel.:shrug:
Click to expand...

You are absolutely right! The textured area is different from the smooth plastic bezels. There must have been 2 different paints used. I used the Duplicolor bumper paint on my dual gauge cluster bezel, and even though it has a slightly more "bluish" tint to it, it looks great once installed because it does not contact any of the other bezels, so the difference in tone isn't really noticeable. That being said, though, if this new one that you found ends up being closer to the original, I'll definitely re-do it, as I'd want it as perfect as possible. I had even thought of doing all of the bezels in the anniversary red, to match the rest of my interior, but everyone I asked for opinions from felt it might be "too much" and make it look tacky.
C

Well, I ended up using the Duplicolor bumper paint in charcoal gray (I think that's what it was called). It has a nice semi-flat finish to it, so it looks very OEM, but has a slightly more bluish hue to it than the original. It is close enough, though, that I haven't felt the need to change it, plus nobody else has ever noticed! I also filled in that stupid recessed slot below the light knob. On the earlier models that was where the defrost button was, but I wanted a smooth OEM look, so I removed that recess, and it looks way better.

I have a Ford OEM spray can for midnight black at home. It's the 03-04 cobra interior factory color and is for touch up etc.

I'll try and get you the part # tonight if i remember..or tomorrow and you can go pick one up from your local Ford dealer (I think it's about $10-12 bucks).

PM me if I somehow forget to post the part # in here.

Had a friend mix me this,and i sprayed my column pod with it.Pretty darn close. 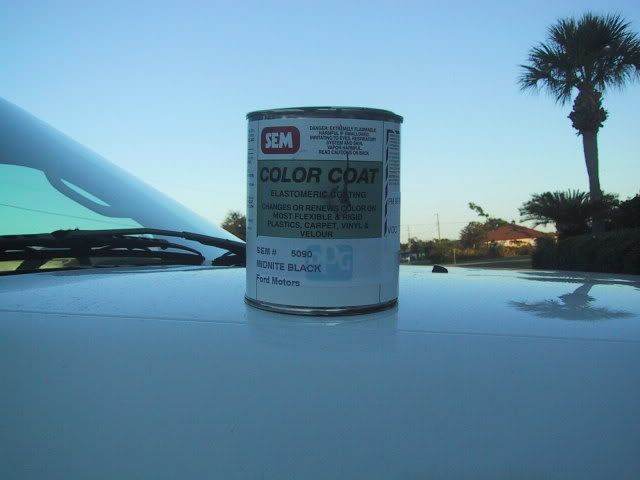 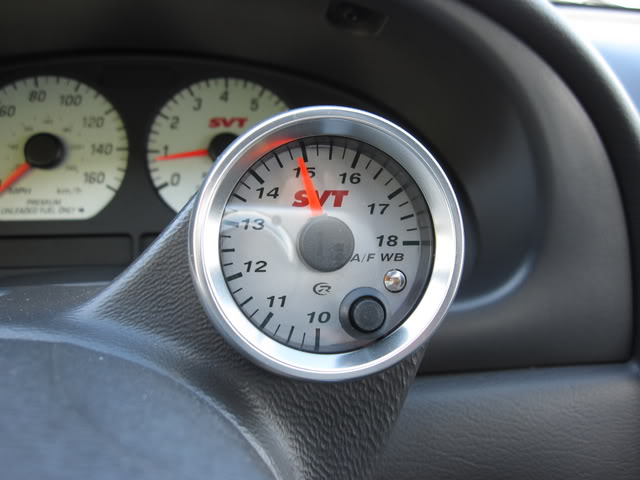