Hey everyone, sitting around the house so I figured id throw up some pics. Other than two or three random pictures I dont think I have really ever shown my car on here. Ive had it for about 2 years and it is a work in progress. Just wanted to show my audio setup that im working on(still not done) Anyways hope you enjoy :beer:

Older pics before I picked it up. Looks just about the same overall other than rims and some small details. Hated the s351 wing at first but now I love it :banana: 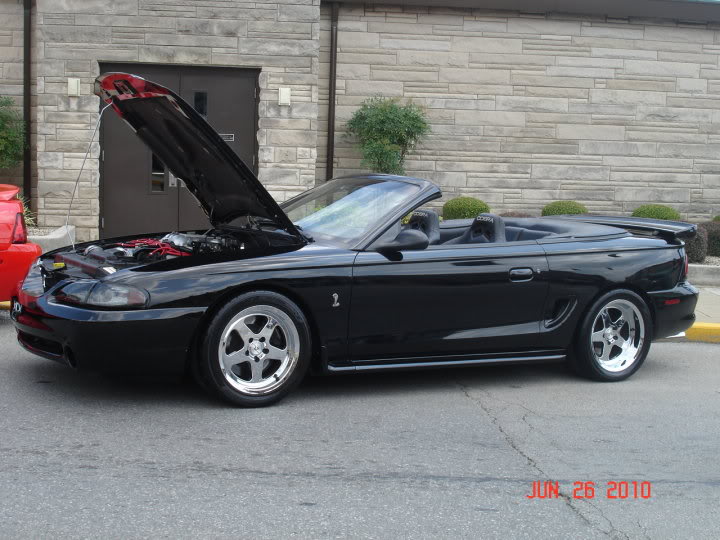 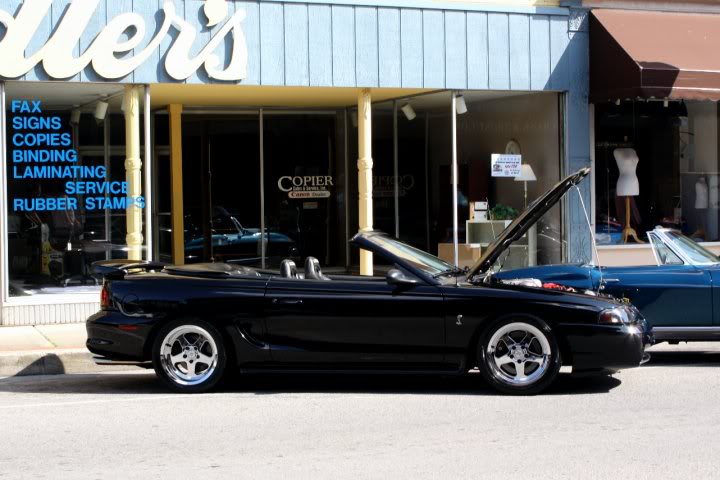 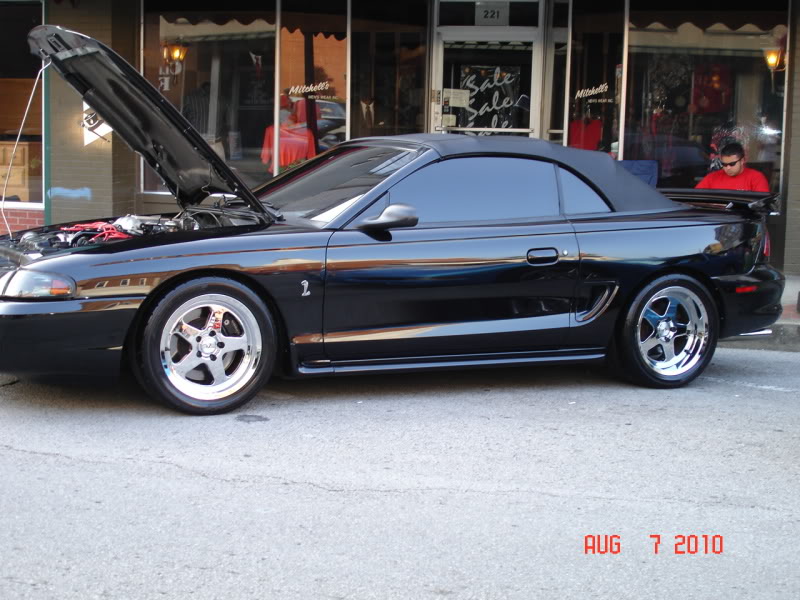 More recent pics. Sorry they are all in the garage but the trans needs to be rebuilt so I cant move the car at the moment :shrug:

A few cell phone pics when I first got it home. Black saleens and some random off brand tires. Looking to pick up some nt05r's for the rear and some invo's for the front sometime soon. 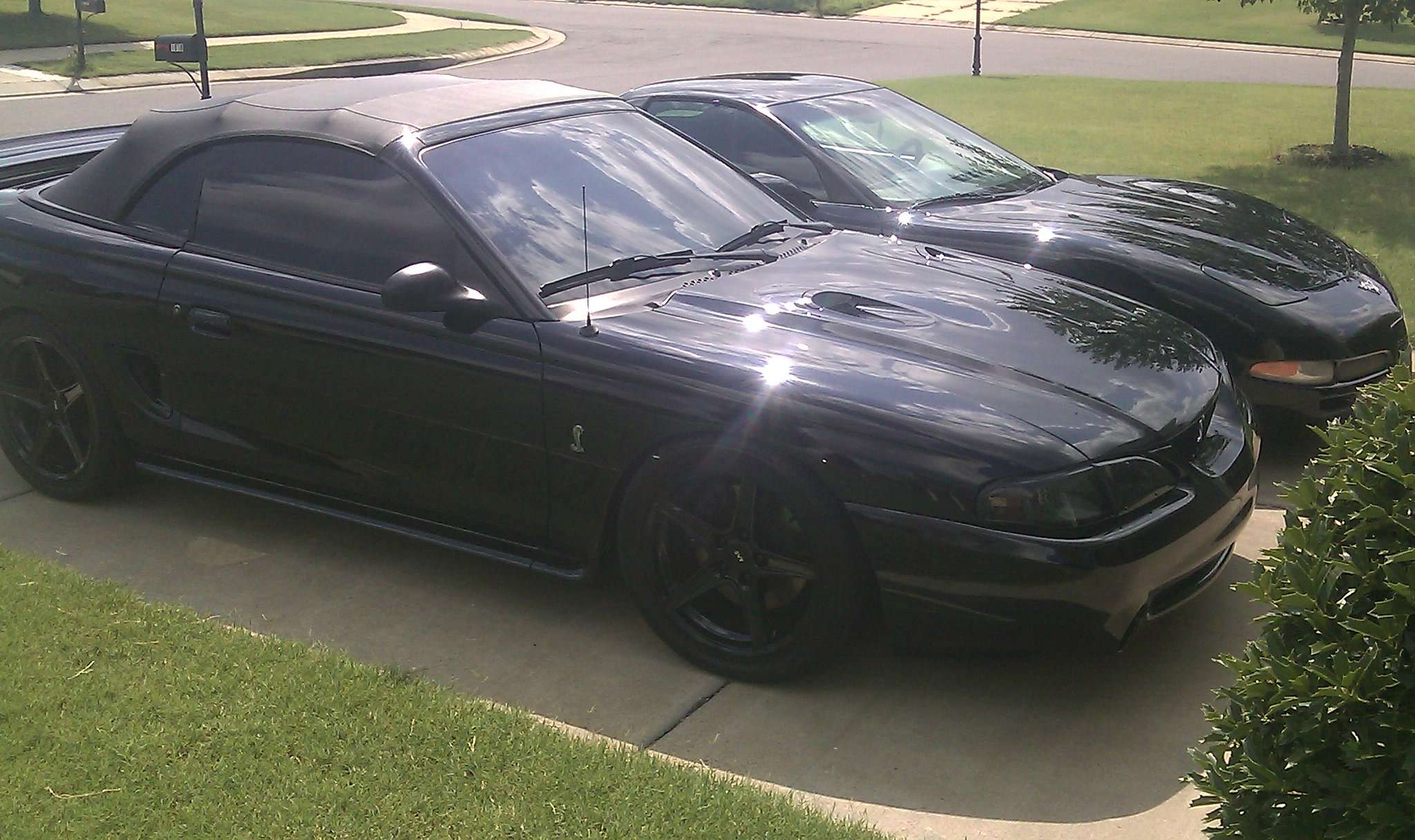 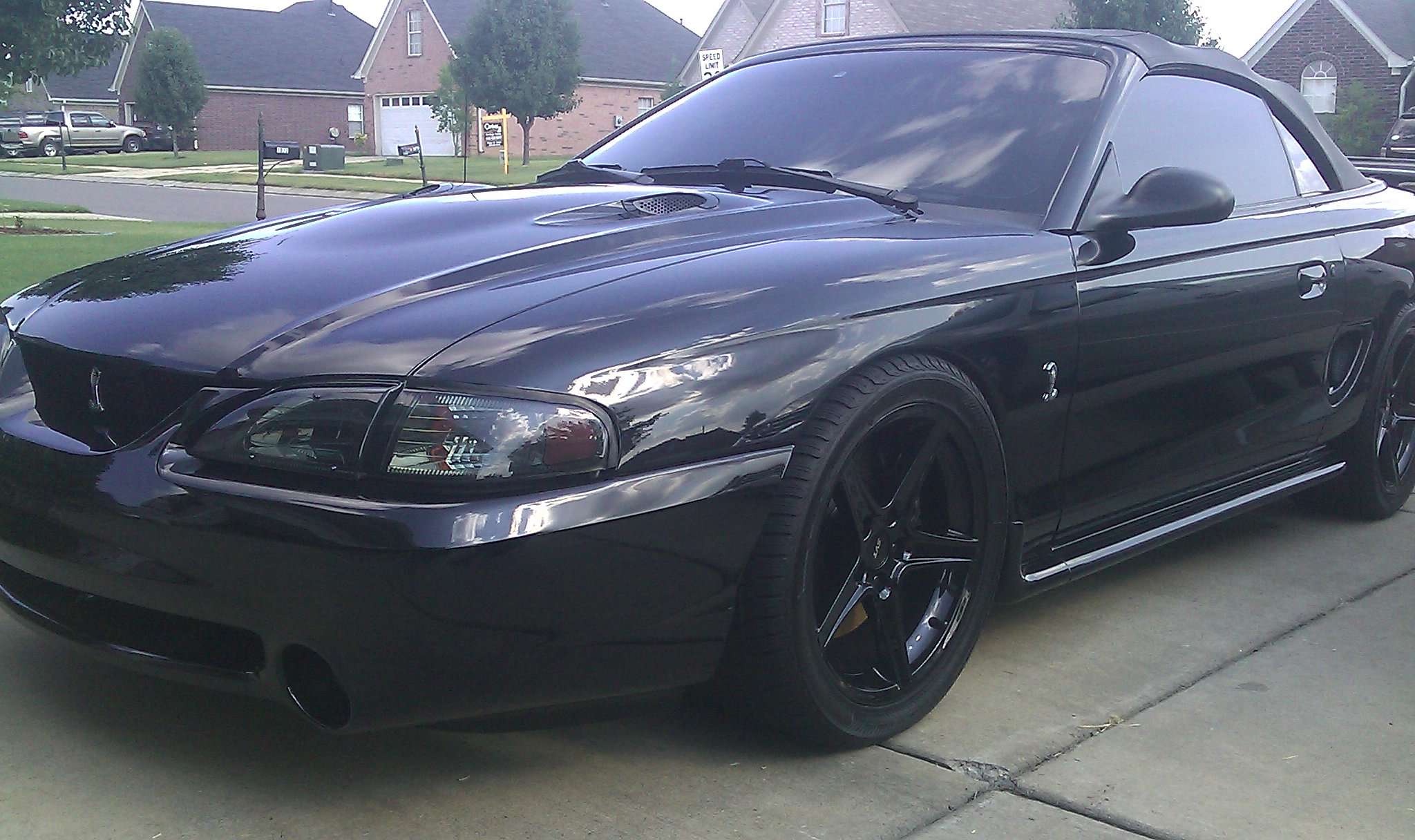 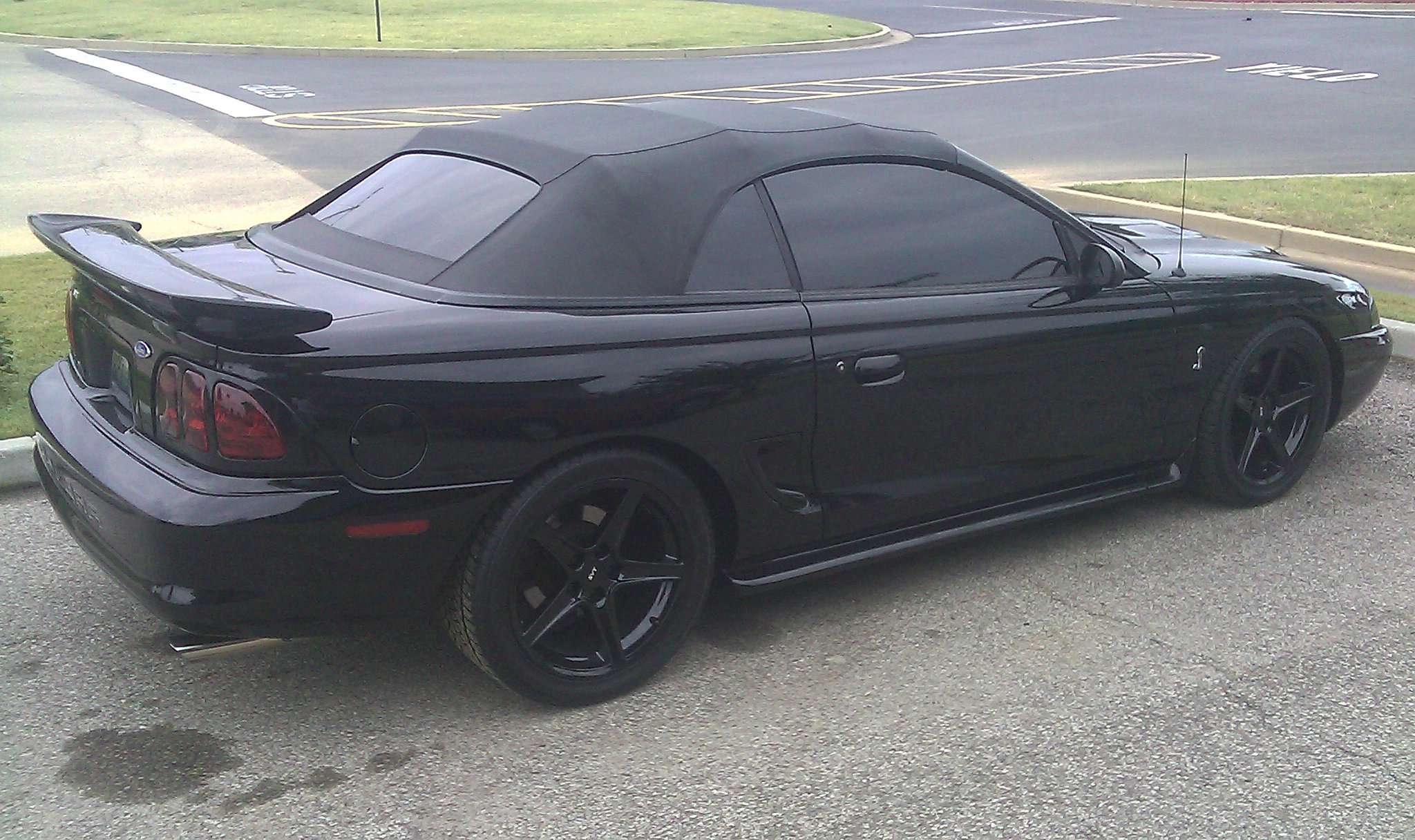 Best of both worlds :rockon:

Interior Pics. When I got it the interior had the aftermarket seats, a mach1 shift knob(stock 5spd), and the gauge pod. The only things I have added are(That you can see):
1.center console from 04 cobra
2.Radio console from 04 cobra
3.Put SVT sticker in tach that I got from a member on here
4.Put in a viper spec t56 so I have a 04 shift knob now.
5. Added Pioneer Z130bt for my head unit. Still working on getting the radio to sit correctly without having to take it to a audio place. I have it snug and tight I just have to found the correct size radio surround piece. Right now I have black painted cardboard around it that I have been cutting to size until I find what I want. 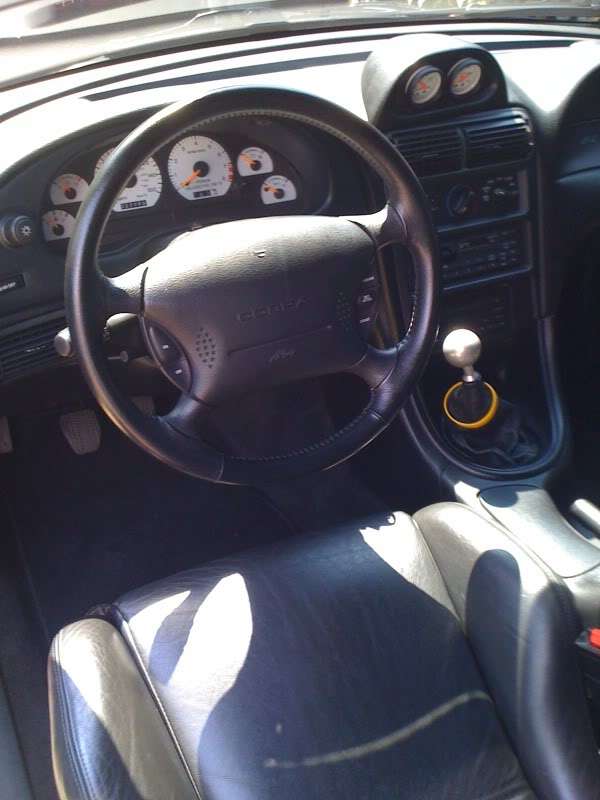 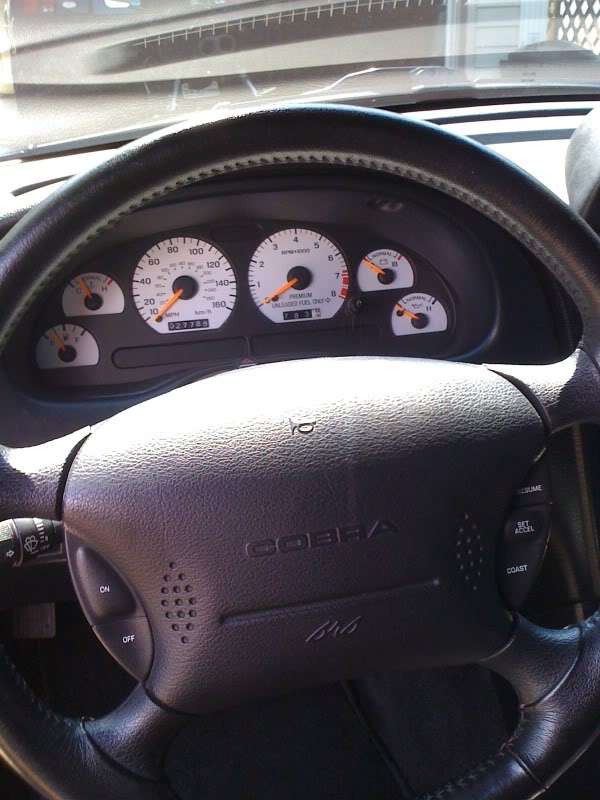 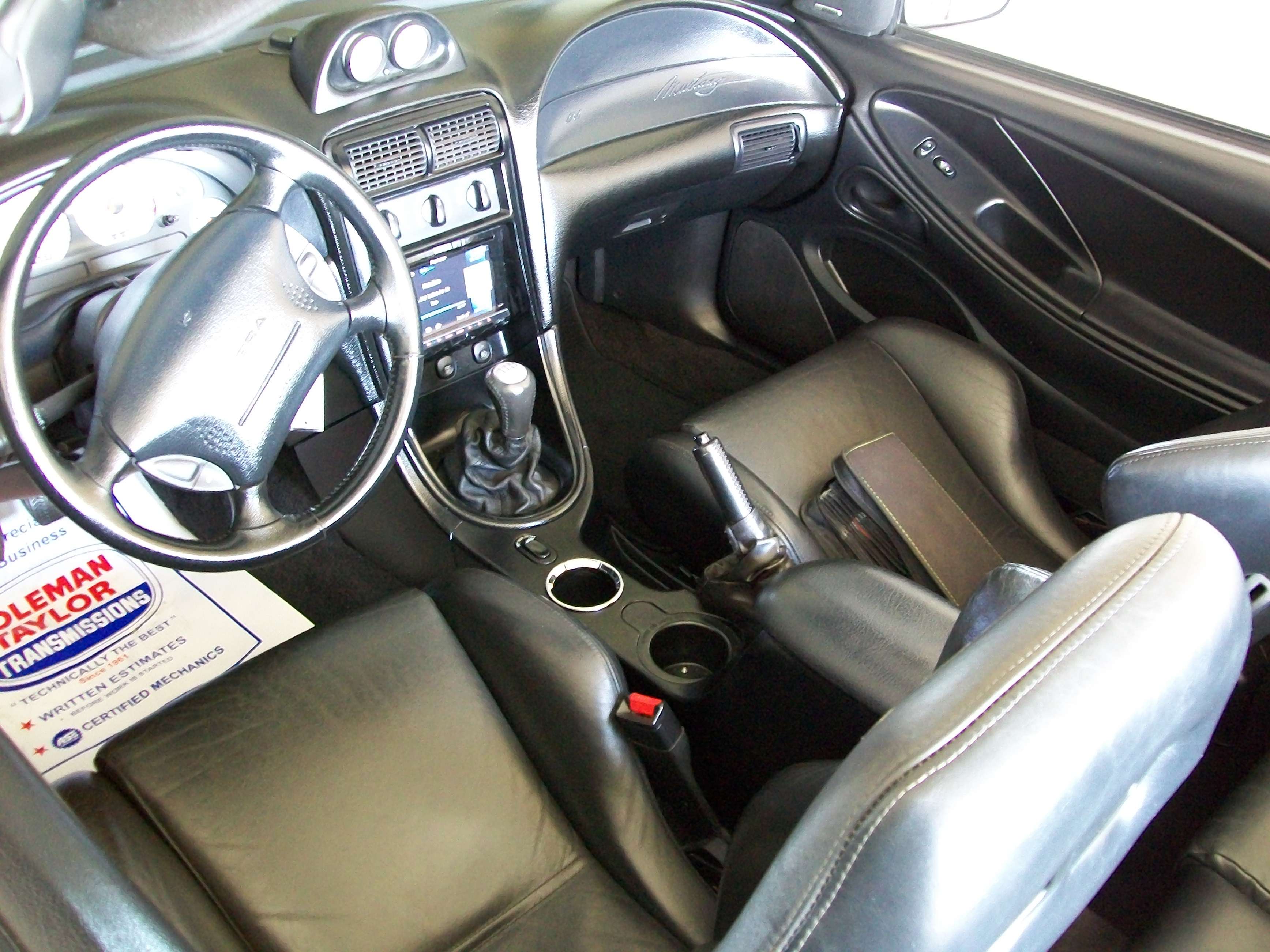 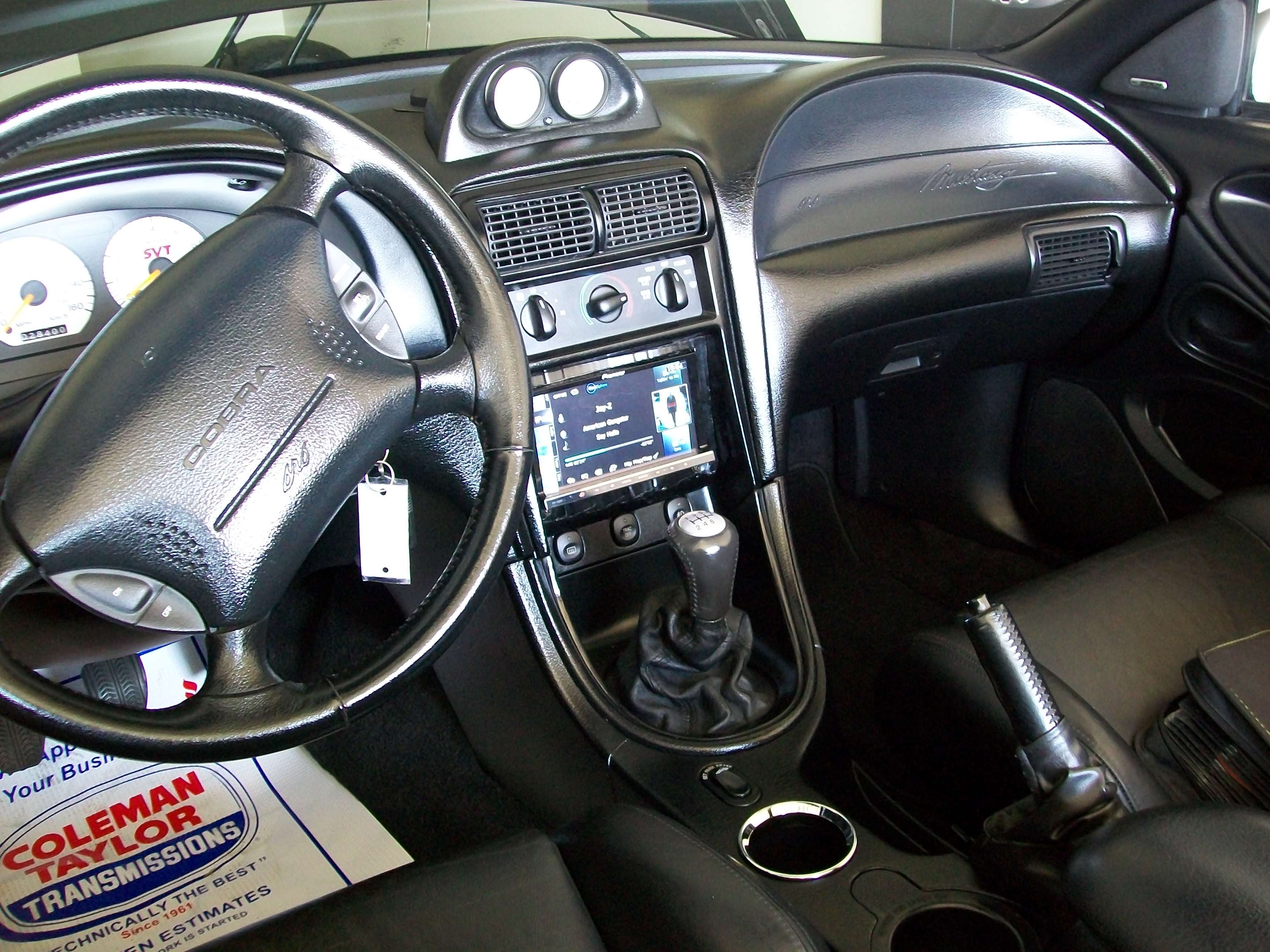 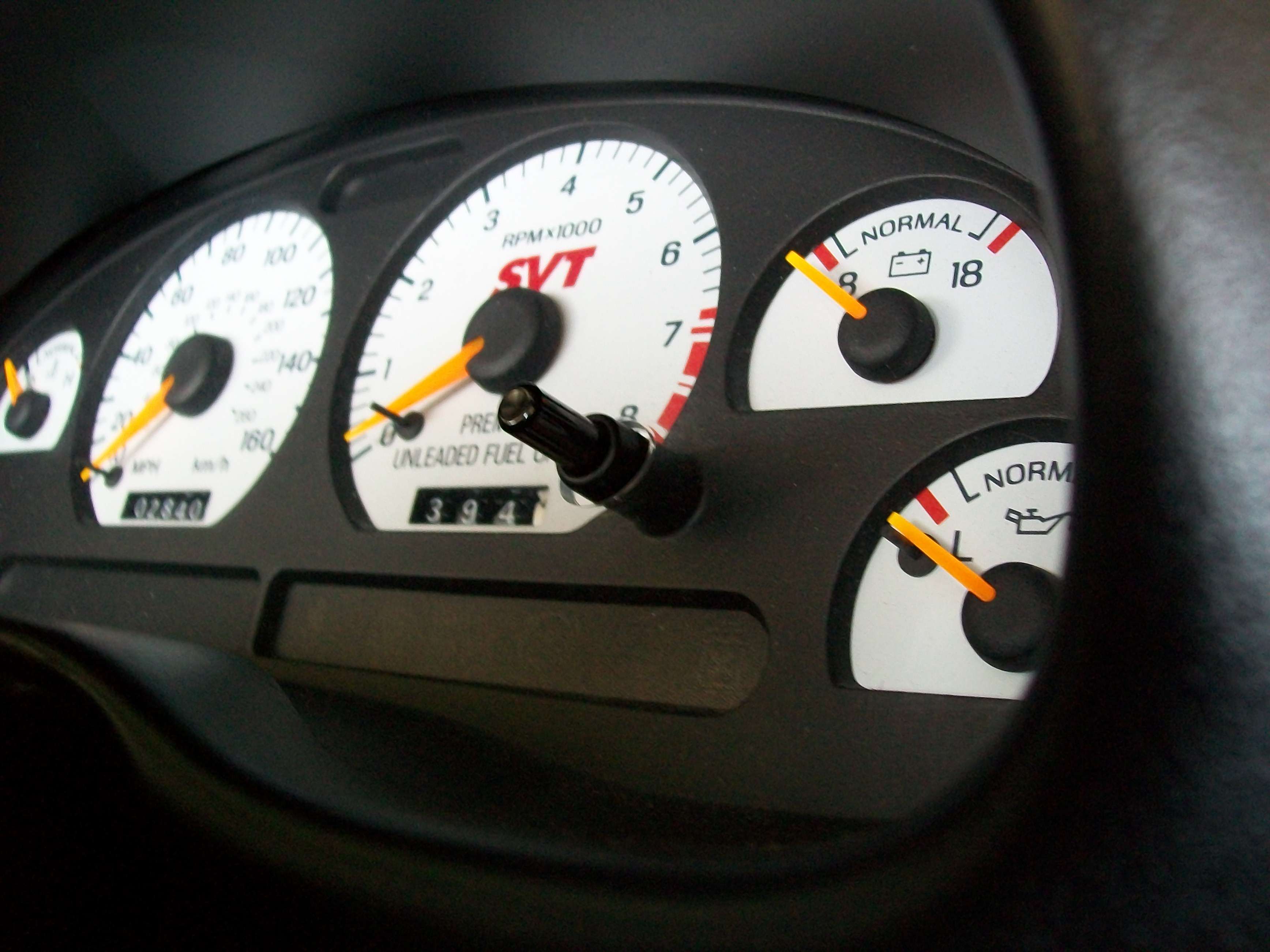 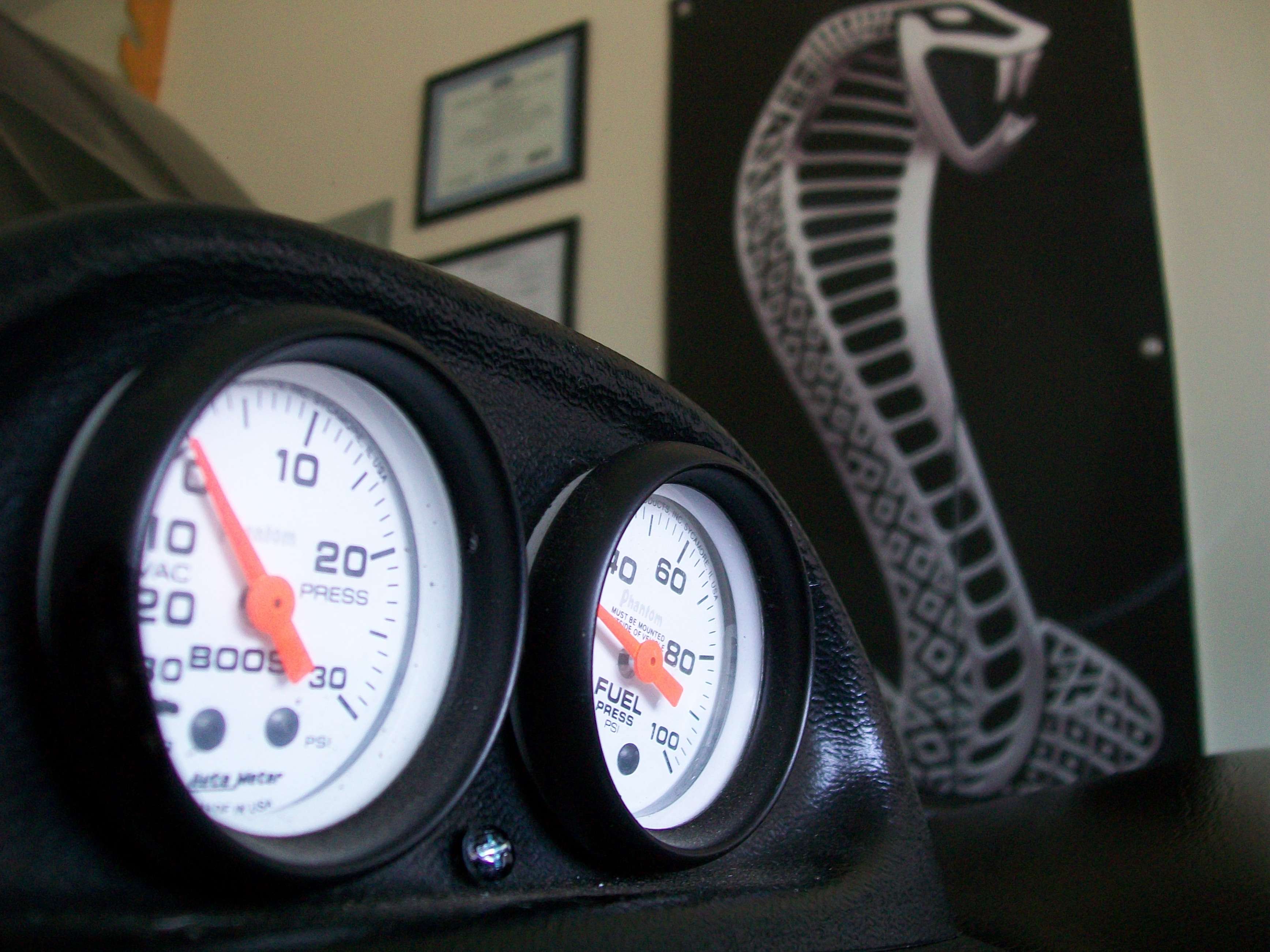 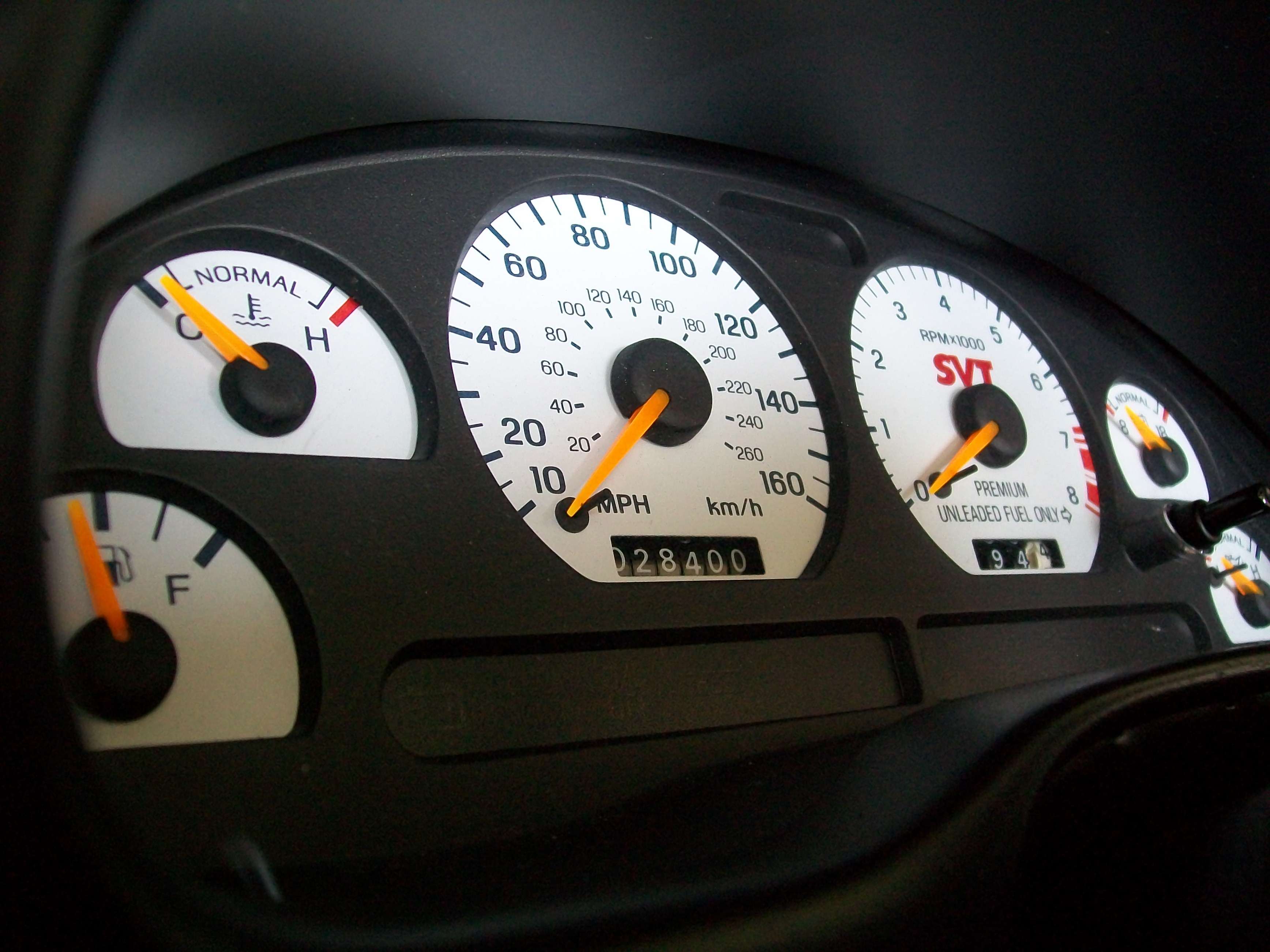 Audio stuff. Well the factory amp that controls the front door subs died so I figured what better time to replace everything Even though I never plan to put the stock setup back in the car I ran all new wires so I wouldnt cut up the factory stuff(plus the factory wires suck anyway). I can return everything back to stock but who would do that

It wasnt hard to run everything and it was cool seeing old ford manufacturer dates on stuff throughout the car. Setup as follows:

Everything sounds really nice but I would like to add some dynamat to the trunk area and find where a few rattles are coming from when I have the sub turned on. I dont have the amp all the way up so its not that bad. The only thing I wonder is should I have used a set of components up front? I would just like a little more bass up front for the times I have the sub turned off.


Fitting in the tweeter

This is where I was wondering If I should have used components or not. Would it make a difference? 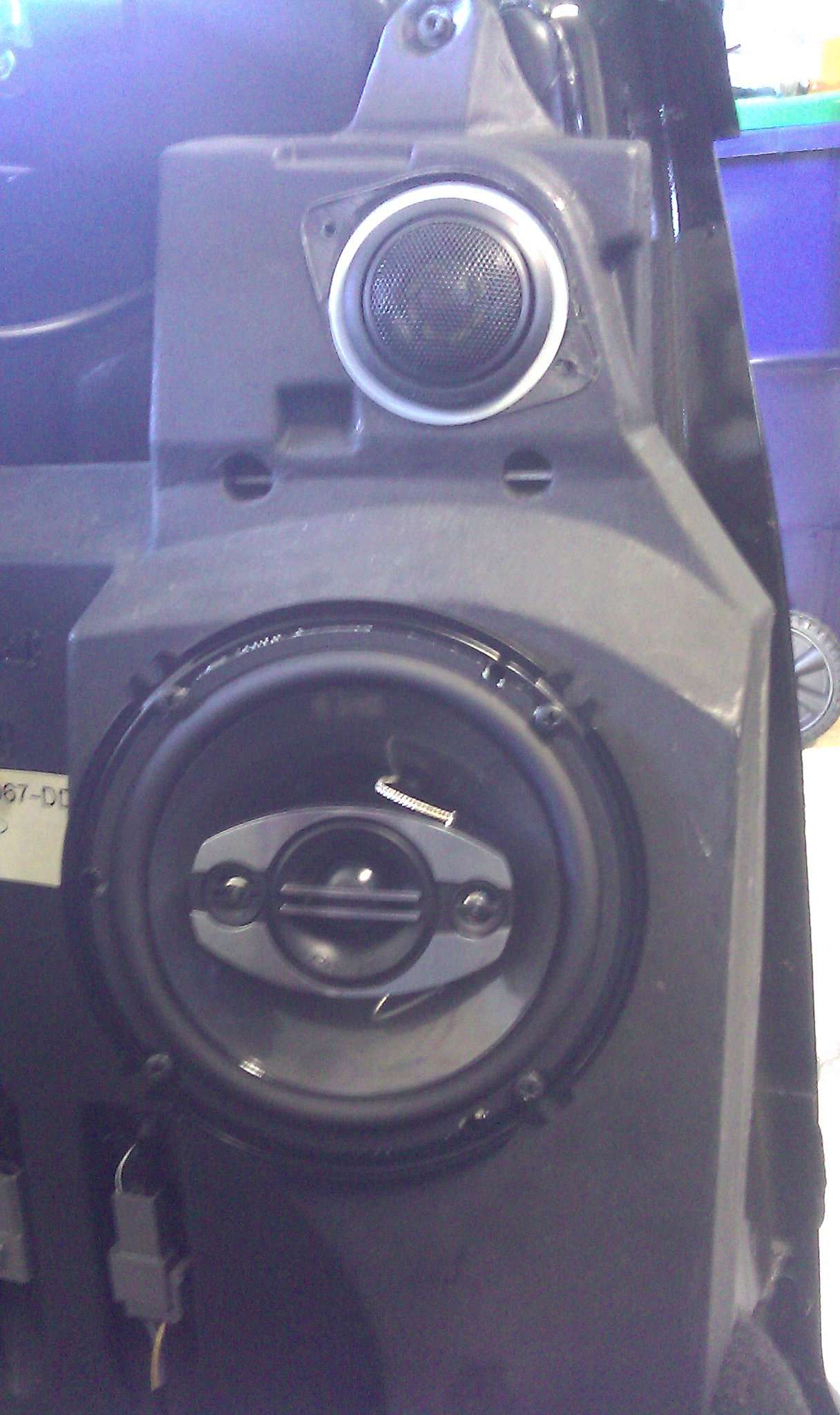 Last is my trunk setup. I didnt want a box that took up alot of room and since the batt is already in the trunk I was trying to come up with something to save the little space I had. I wanted it to still look nice so I think the locations I chose for everything worked out 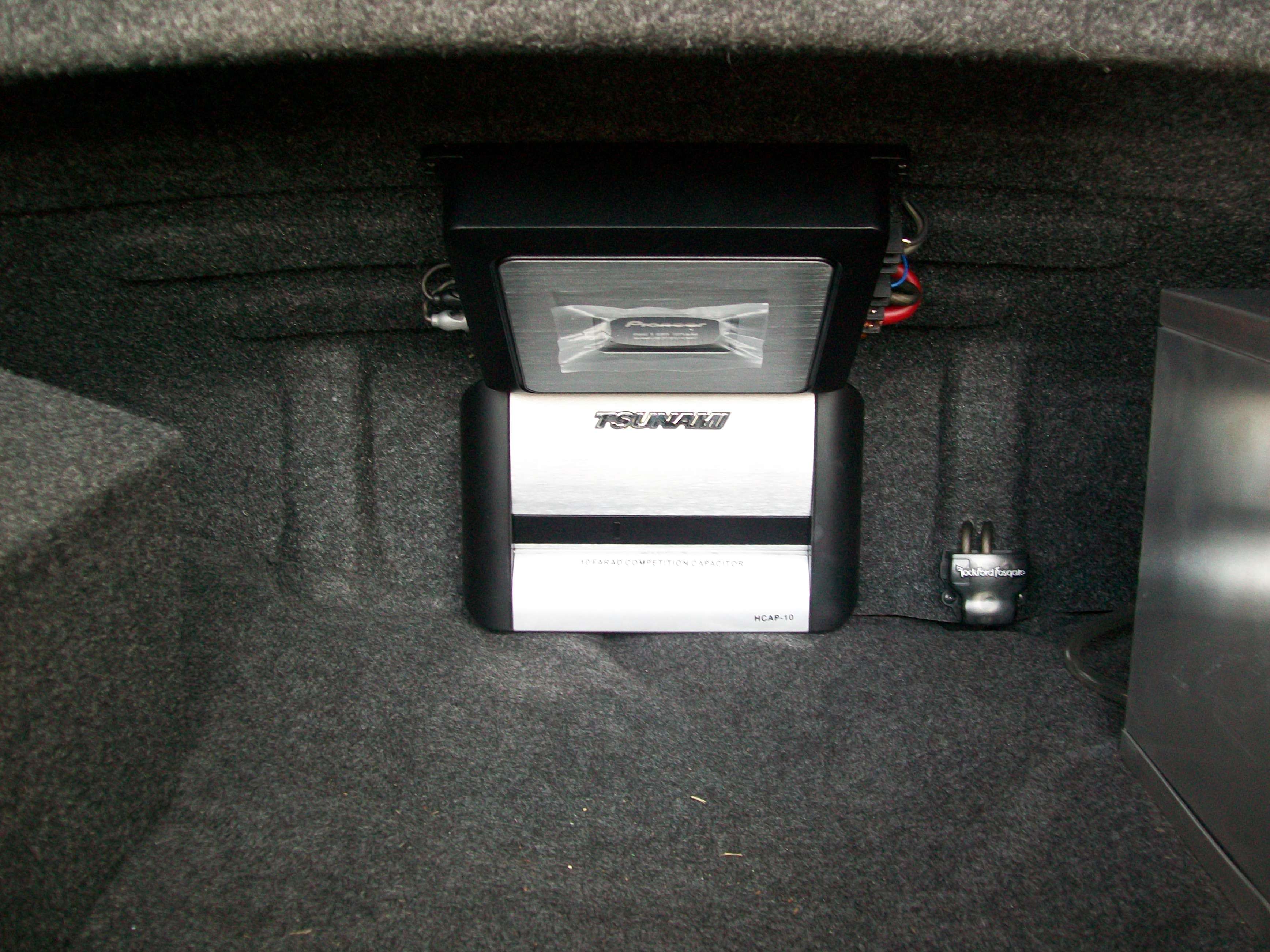 Here is just a vid with me playing around. Posted a direct link for the guys like me who use outdated cell phones and also a direct vid on here :lol:

Future plans are:
Switch over from air/water setup to air/air and get some mmr Imrc deletes.

I want to put a mondo valve on it(when I go air/air) but I get tired of hearing the bosch thats on the car now. I know the mondo will be louder but maybe I can do something to quiet it down. Who knows I may like how its sounds.

I want some different rims. The car looks good but I know it can look better ha.

One mod at a time

Damn that's a clean car. I loved that vid too, what kind of blower is that? S-Trim V3? Nice sound system, I hate this factory sound system lol.

I like the rims the car came with, not everyone and their mother has them and they look good too.

Thanks for the compliments

The blower is a V2 T-trim. I love the sounds that thing puts out haha.
Before I found the car I had in my head I wanted a black cobra on black saleens. When I went to check the car out I told the guy to keep the wheels and lower the price on the car.

I do like the saleens but like mentioned I want something different. I plan on getting some forged rims for it.

Wing is a bit much though, but I dont like big wings.

The wing has grown on me ALOT. When I picked the car up my plan was to ditch it and start shopping for a stock wing. The longer it took to find a stock wing the more the 351 wing grew on me.

very nice job with everything..

I have fosgate components up front, definitely lacking in bass. Thats why i never turn the sub off..lol

Nice car man! Looks amazing but the only thing I can say I would change is the wheels, it looked much better before with the chrome sc wheels.

I have fosgate components up front, definitely lacking in bass. Thats why i never turn the sub off..lol


HERE'S WHAT I DID FOR MY TRUNK SAVER BOX
Click to expand...

Did you ever get everything to stop rattling? It sounds very nice with the top up but when I put it down I can hear stuff rattle from the trunk area.

Thanks everyone so far :beer:

Tunedprt91 said:
Did you ever get everything to stop rattling? It sounds very nice with the top up but when I put it down I can hear stuff rattle from the trunk area.

Im not sure you'll ever win having it fire up like that. Mine definitly got better, when i crank it up, there is a slight typical trunk buzz on the outside, but i dont here anything in the inside.
Last edited: Feb 28, 2012

F8L BYT said:
Nice car man! Looks amazing but the only thing I can say I would change is the wheels, it looked much better before with the chrome sc wheels.
Click to expand...

He did change to the chrome from black :banana:

Did the factory grills fit over the tweeters?

Yep they did but it was a very tight fit upfront. The door tweeter grill snaps back in place but there is a tiny buldge(does not stand out, you would have to know its there to notice) from the tweeter hitting the cover.

Cool. I would only want to do it if the stock aesthetics could be kept
Q

Sick ass car :rockon: I love the way your car looks with the S351 wing, I maybe a lil biased tho