Watch Out - It Can Get Away From You

Watch Out - It Can Get Away From You 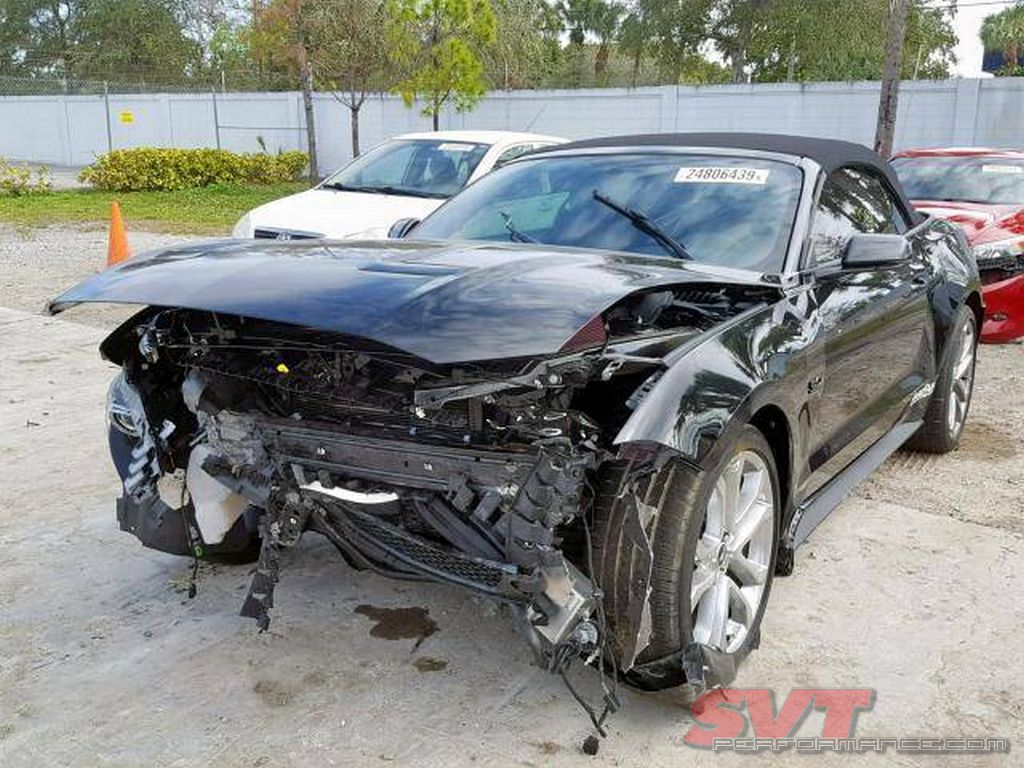 High-Horsepower Mustangs and inexperienced drivers seem like a match made in the salvage yard. At least that seems to be where to pair often winds up. You know the story; someone buys more car than they can handle, they decide to put on a show, and destruction ensues. I first noticed the phenomenon becoming more common when the 2007 SVT GT500 Mustangs started hitting the lots.


Those cars tended to bring a less performance experienced buyer into the showroom than the previous generation Terminator Cobras. In fact, one of the first GT500s that I remember seeing on the street nearly ended up in the wall at the Myrtle Beach Speedway during Mustang Week over a decade ago. Since then we've seen technology progress to the point that building an 800RWHP Mustang is beyond simple. Just make a phone call to the likes of VMP Performance, Lethal Performance, Team Beefcake Racing, or TPS Motorsports and could have a blower kit with all the trimmings.


The options are plentiful; be it a VMP TVS, Whipple Twin-Screw, Procharger or Vortech Centri, or a Hellion Turbo System. All of them can wring power levels out of a Gen 3 Coyote that would put a 4.6L 2V owner's jaw on the floor. If you're not used to it, that kind of power can have a quick romp on the throttle end with the car pointed in the wrong direction. The car will steer in the direction the wheels are pointed, and inexperienced drivers have a tendency to over-correct when the rear-end breaks loose. The result is often a collision with a stationary object (like a curb) or a crowd if they're leaving a car show.


I have no idea what happened to the car below (which I found while browsing Craig's List), but it has a lot of the telltale signs of what we've been talking about. Newer car, low mileage, Whipple blower, and curb smashing'ish damage. What do you think? Have any interesting pics/vids of things going sideways on over-powered drivers? Post them up. 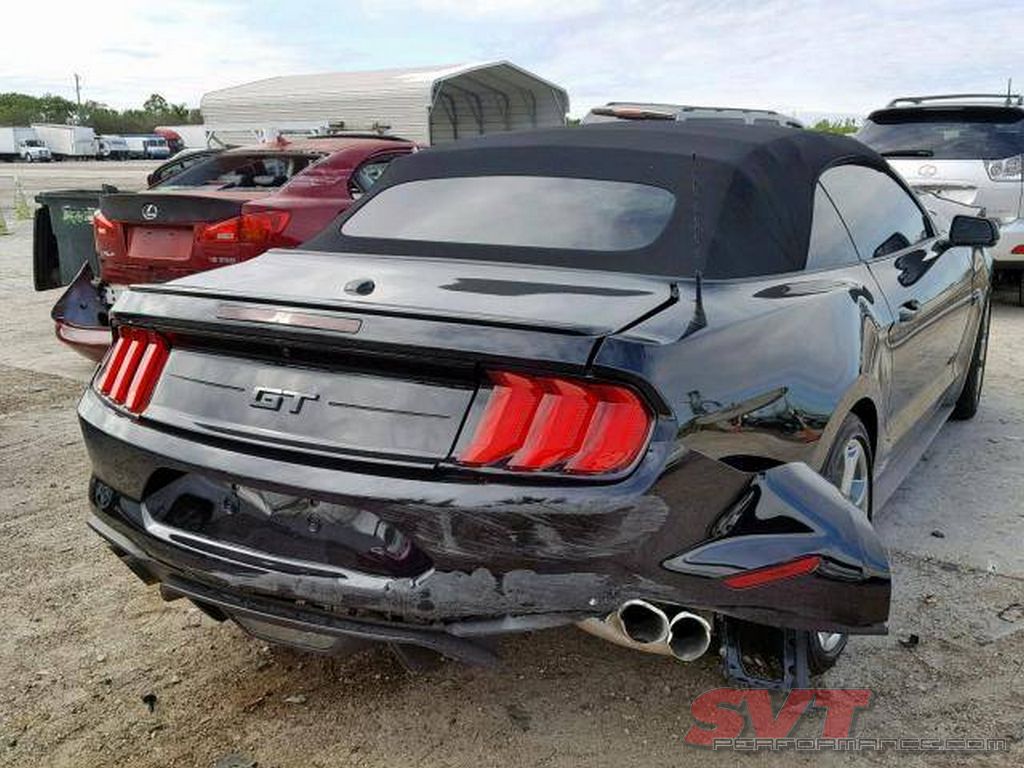 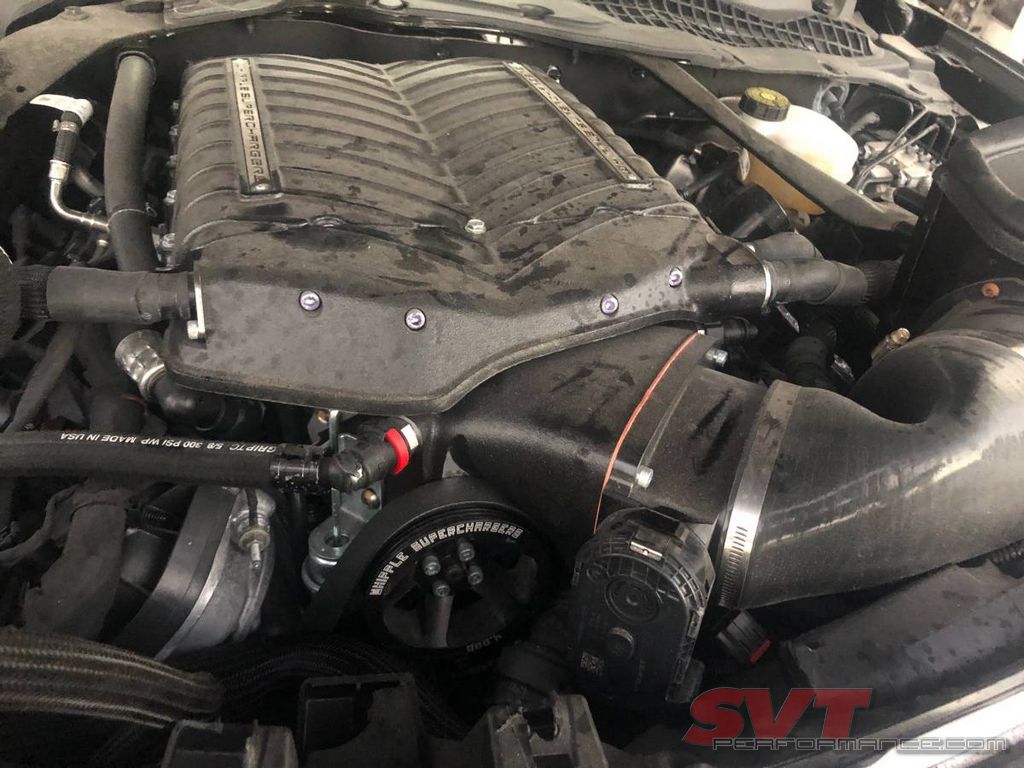 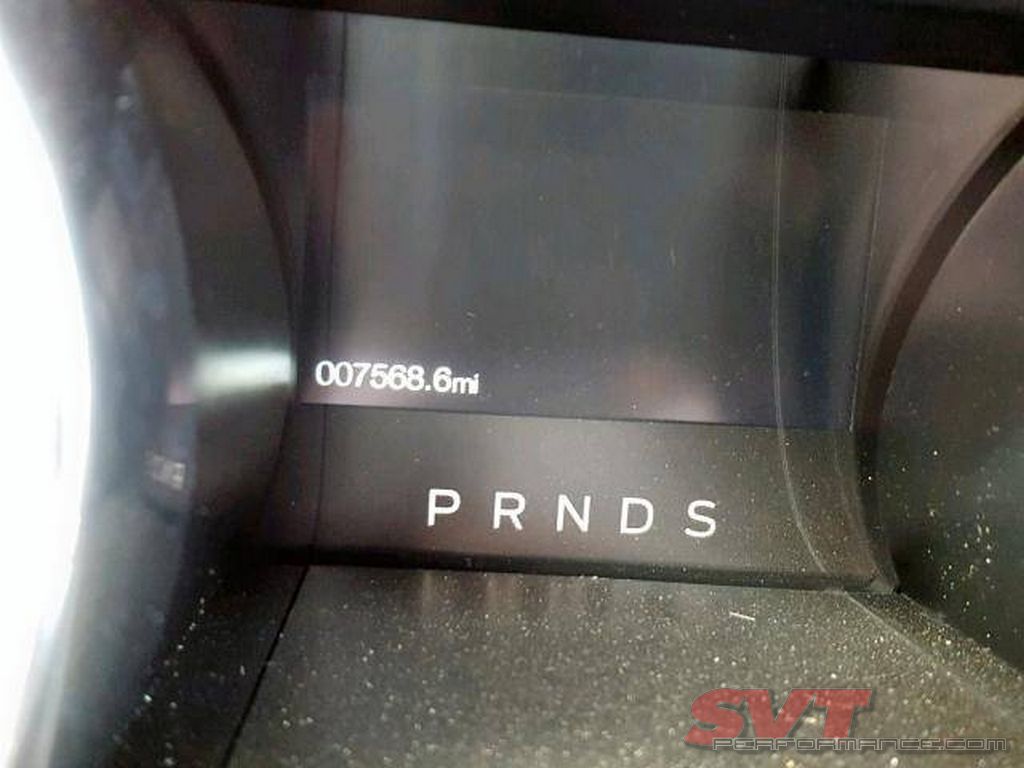 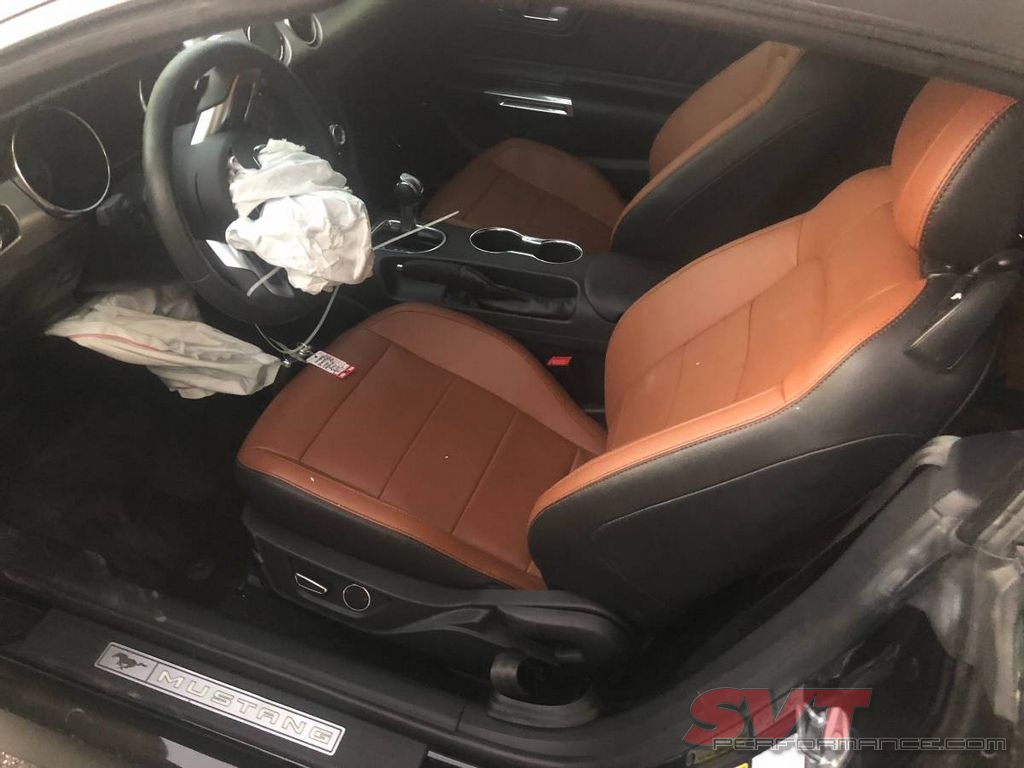 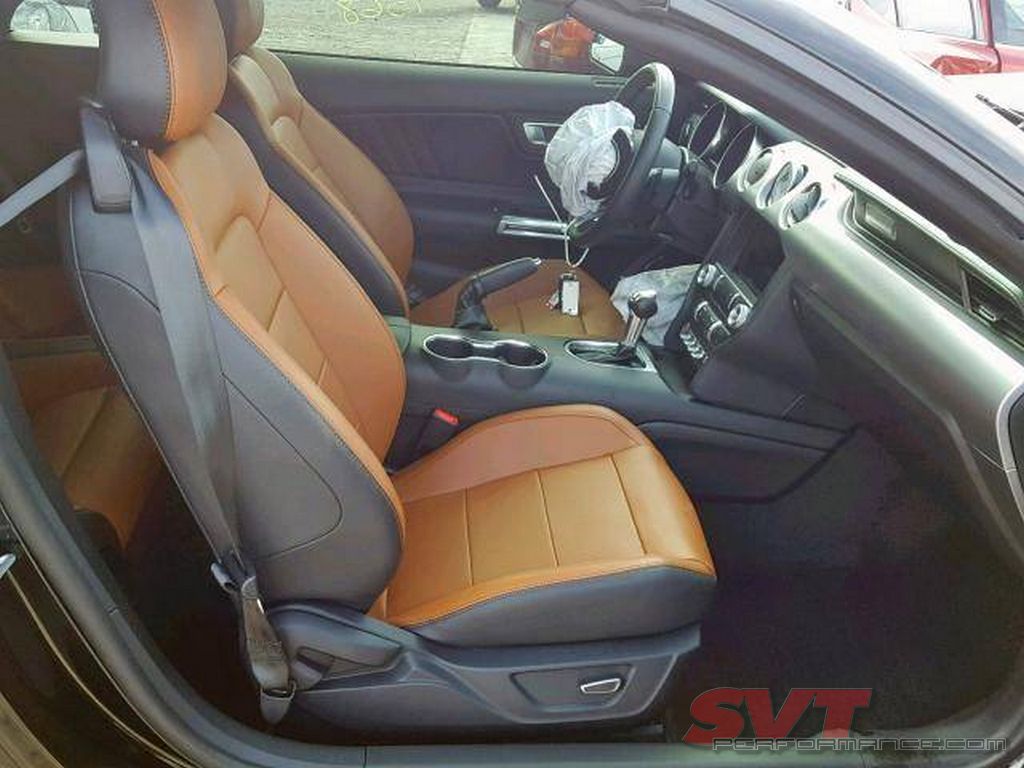 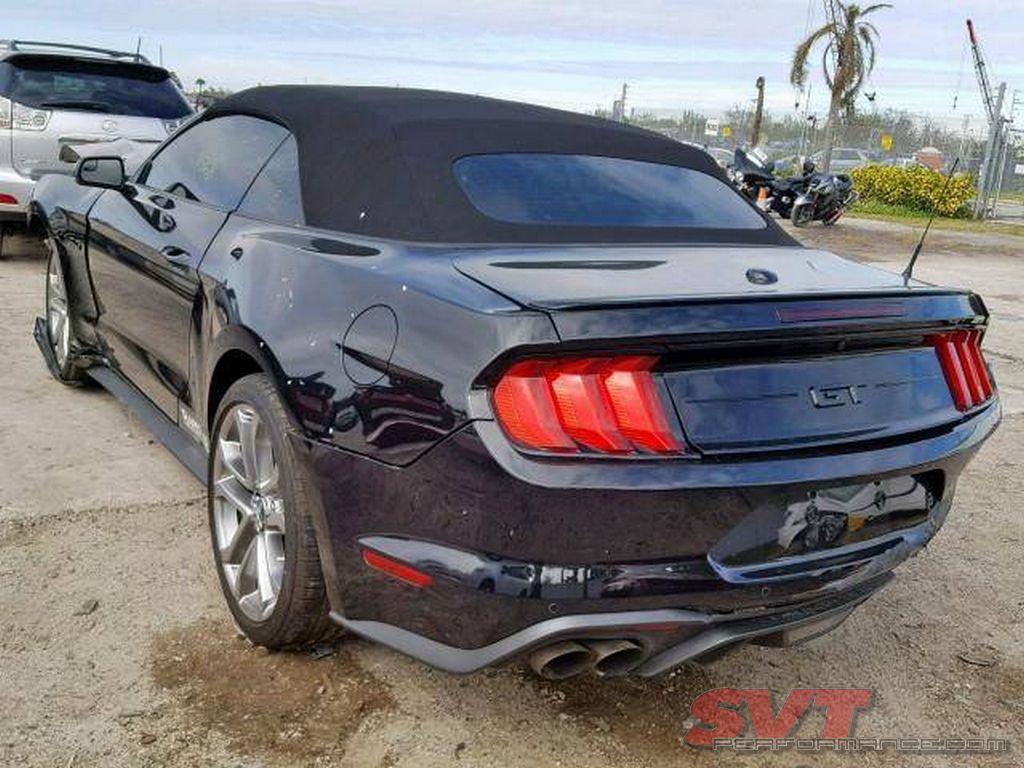 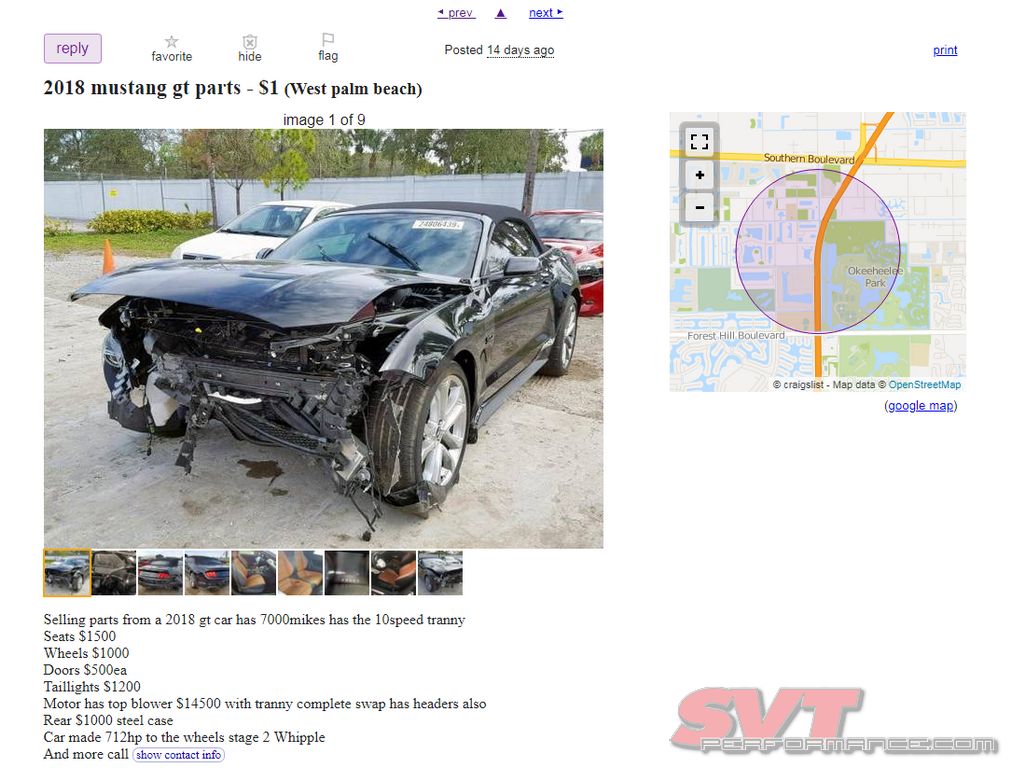 Its amazing what is possible when the ego overrides the voice of reason that most of us have.

Ive had my GT500 smashed up before, but it happened on a "track" racing against a GTR. GTR blew its driveline, locked up all 4 wheels and lost control into me. I was absolutely blessed that I had no frame or major structural damage.

The guy driving wasnt the owner, but the tuner hired to dial the car in for the owner. Apparently he told the owner the car (900awhp) was making too much power for the stock driveline. Told the tuner to send it. Unfortunately he sent it into me. :/
It is heaven for the Coyote swap guys. Turn key engine/tranny pallets right to your front door! It is amazing how many are being scooped up. The GT350/6R80 combo they package up is so damn tempting!
Along with the added power, suspension & tire mods are often overlooked. And then comes trouble!
Its sad, but this happens way to often with the performance cars from the big 3.
Respect the car and respect speed otherwise you are doomed


Sent from my iPad using svtperformance.com
Is this a required PSA? Unfortunately the butt of many car jokes. If it wasn't for bad drivers, I wouldn't own my GT500.
Any car with 700+ hp that is NOT on a DR or r888r type of tire is going to end up in an ad just like that.
Even NA mustangs and such these days are way more than enough to get an inexperienced driver in trouble. I haven't really played with a new car much to see but I know traction control in my car (2003) can make things worse, there are situations where if you know what you're doing being able to keep the wheels spinning is better than not.

People used to slowly build up to 500, 600, 700+ hp over a long period of time and you learn to handle that as it grows. Now any idiot can go to Lebanon Ford and walk out with 650hp, that's exponentially more than needed to get you in trouble. According to social media every car makes 600+ so their car needs to too. I forget the numbers at this point but in the early days of the Viper an obscene number of them were wrecked or totaled on the way home from the dealer
Is this happening because they are turning off Stability Control in addition to Traction Control?
Last edited: Sep 30, 2019
Just a note here.

Remember that as the weather gets cooler, so do the streets. Just like driving in snow and potential ice, test the level of traction you have now that we are out of summer weather.

Remember that as the weather gets cooler, so do the streets. Just like driving in snow and potential ice, test the level of traction you have now that we are out of summer weather.

I can tell you from experience that a bone stock GT350R can be a handful on dry pavement when the temps are in the 30s.

Yeah, last Saturday coming home from C&C I rolled onto the throttle (Cobra replica) on the interstate, took me 2-3 seconds to realize the back end was broke loose. LOL, at 70 the back end comes loose....

COOL COBRA said:
Along with the added power, suspension, tire, AND DRIVER mods are often overlooked. And then comes trouble!
Click to expand...

Those track focused summer tires really get twitchy in cold temps!
My drag radials never get that unpredictable but the stock GY on my ‘14 were down right scary when the temps were under 60 even.
-J

biminiLX said:
Those track focused summer tires really get twitchy in cold temps!
My drag radials never get that unpredictable but the stock GY on my ‘14 were down right scary when the temps were under 60 even.
-J
Click to expand...

They basically end up like the hard plastic tires on a Power Wheels car.
tire to hp ratios
315s have been the bar for far to long. A set of Nitto 375s or 415s with bolt on rear fender kits is long overdue.
The hit above looks more like a rear end job...

I was reminded how that can happen in an instant too.. I've never rear ended anyone, but almost did 2 weeks ago.

An Ambulance was approaching an intersection going east as I was going through south and I didn't notice it, as it approached the intersection only then did it flip on it's lights and blared the siren, it did so right as I was passing through and it immediately made me look over to my right and take my eyes off the road, just as I look back the Truck in front of me stopped in the middle of the road while already being through and passed the intersection.. I hit the brakes and immediately knew I wasn't going to stop in time, I swerved left just enough to miss the Truck and lucky for me the car in my blind spot to the left I guess they saw it unfolding and swerved too and that gave me room to squeeze through and not hit either of them..

Holy F I was so thankful to that person !

biminiLX said:
Those track focused summer tires really get twitchy in cold temps!
My drag radials never get that unpredictable but the stock GY on my ‘14 were down right scary when the temps were under 60 even.
-J
Click to expand...

I can tell you I literally CHUCKED each of the Spinyears as i dismounted them off my rims. Literally the only time I ever had traction with them was while in Phoenix, summer of 2016, while job hunting. Thats it.

The 2019 Shelby GT350 owner's manual warns against driving one with temps below 45 degrees F.